Let’s cut to the chase :

To give you an example of how we are always, always, always working on making our games better, as I typed the first sentence in this post I thought to myself,

“Cut to the chase is an idiom. I should include that in one of the matching activities in Aztech (Our suite of bilingual games under development). It’s probably not obvious to a non-native speaker.”

Awesomeness for Mac and Windows

Awesomeness for Google Play and iPad

Awesomeness for Chromebook, Mac and Windows

Many of the comments we receive are valid. We do consider all of them, even the snarkiest ones and 90% of our day is spent on making these improvements. (We need some marketing people to balance that out and we hired one this week and another starts in February.)

What I’d dispute, though , is that no one will use a product until it’s perfect. In fact, they do and you probably should (I say probably, because I don’t really know you).

I use a lot of Apple products (I use Windows also, but today let’s talk about Apple which has sold approximately a bajillion iPads). The copy function on my iPad doesn’t work all that well. I often end up scrolling instead of increasing the selection size.

I bought a new MacBook Pro and I don’t even want to go into the huge hassle it has been trying to get it set up – and, mind you, Dennis and I have six degrees and 60 years of programming experience between the two of us. 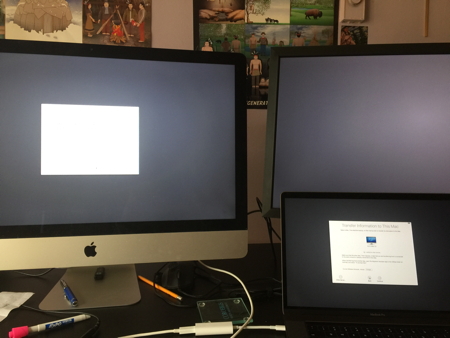 Both screens say “Searching for computer”. They’re CONNECTED for God’s sake! My fish can locate the other computer!

It took an hour to install from time machine back up – which didn’t work, we reinstalled the operating system twice – anyway, you get my point. Anyone who has ever sworn at Siri gets my point.

Obviously, none of these facts are deal-breakers to the users, and I suspect Apple is working on all of them.

What we have chosen to do is produce games that are fun to play, teach math, social studies and language, but are fun to play (yes, I said it again because it’s true) so even kids (and adults) play them when not in school. That’s a good enough reason to make them and buy them. If you have no money, or just want to keep your money to buy whiskey, you can even get Making Camp for free.

A lot of people – including teachers, kids and well-educated adults – the three groups that comprise the large majority of our user base – LIKE to be involved in a product as it develops.

Even if you don’t plan on being part of a product in development, you really are. After years of being the first kid on my block to buy every new device, I finally started waiting a few months, at least, until the worst of the bugs had been worked out. Too many times, I plunked down my money for a shiny new device only to have to return it the next day because of a hardware or insurmountable software problem.

Yet, I keep buying those devices because they do things I want.

That’s why you should buy our imperfect games – they will get your kid to study fractions without fighting , they will help you remember useful math facts without boring your brain into mush.

While you’re at it, we will continue improving the games every day and taking your comments to heart – the game design comments that is. You can quit telling us we’re ugly.