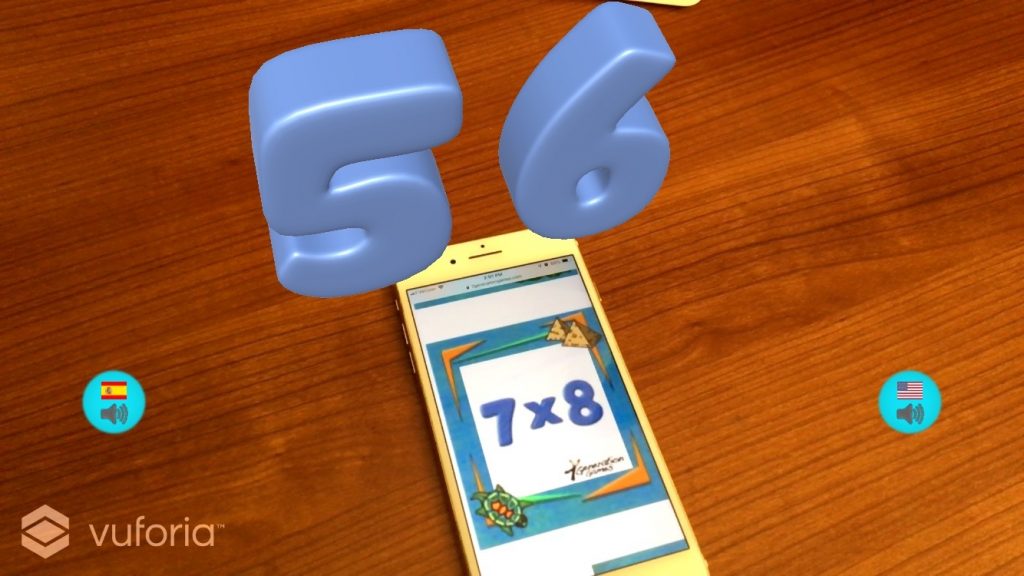 Augmented reality is when a game or app combines real world images and virtual (or not real) images to show you a new image.

To do this, the app uses your device’s camera to see the world around you. Then, the app adds an image of something that is not there – such as characters or 3D elements – on top of what you see in real life.

If you’re still a little confused, that’s OK. When talking about augmented reality, or A.R. for short, it’s sometimes easier to understand it when you see it.

Here’s an example from someone playing one of the augmented reality games from our “Math: The Universal Language AR” series.

Here’s another look at how augmented reality works.

This is what you would see in the real world: Two cards on the rug.

This what you would see if you opened up the camera app to take a picture and held it over the cards.

This is what you would see if you opened up the “Math: The Universal Language AR” app and held it over the cards.

Do you see how the image that isn’t there in real life pops up over the cards and looks like it is there? That’s augmented reality.

Another of example of augmented reality that you may be familiar with is filters for pictures. There are many apps that let you add filters to photos you take of yourself in that app. For example, these two didn’t really spend the day at a fancy spa.

Augment means “to add on” to something. So in this case, the images are being added on top of the actual picture of the world around you to create an augmented reality.

1 thought on “What is Augmented Reality?”