Because a picture tells 1,000 words 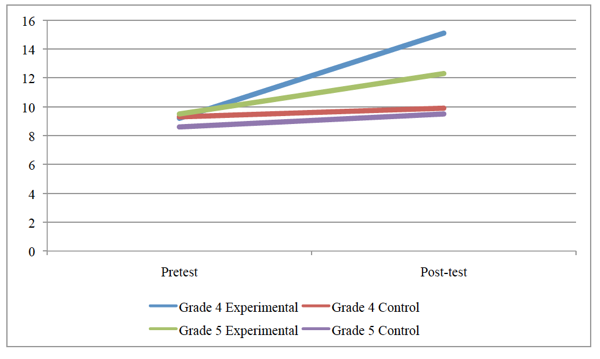 Fourth- and fifth- grade students from two schools in the same rural community were tested on multiplication, division and basic math facts. After 10 weeks, students were tested again. Students who had played our games an average of 30 minutes, twice a week, improved their math scores 50%.  The control group school students improved their scores 10% . Students in classes that played the games less often (the fifth-graders) improved less than 50% but still more than the control group.

We have since replicated these results with larger samples, in different communities and with our games for older students. Not every school showed the dramatic improvement of our pilot study, but the average improvement is around 30% and significantly higher than control groups.

The full text of five papers is below.

Dakota Math Project: Final Report to the U.S. Department of Agriculture – Results of our pilot study of Spirit Lake: The Game

Results from our first pilot – The Julia Group

Yes, PROC FREQ does that – Item difficulties and other psychometric data, pre- and post-test results for Fish Lake, presented at the 2015 Western Users of SAS Software conference.

The value of perseverance: Using Dakota culture to teach mathematics – Transmotion, 4 (2), 113-131. Spirit Lake: The Game is an example of how the value of perseverance in the context of traditional Native American culture can be applied in contemporary society. Efficacy of the game in increasing mathematics achievement was tested with a sample of fourth- and fifth-grade students from two reservation schools. Students playing the game showed significantly greater improvement in mathematics achievement from pre- to post-test.

How we know an intervention works: Program evaluation by example