The games listed below are our English/Spanish bilingual games, listed by grade. You will also see on which devices each game can be played. 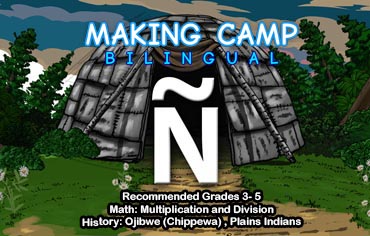 Learn multiplication using augmented reality – in English and Spanish! Forget about boring flashcards. Simply hold the app over the game cards and see the numbers and problem solutions appear as 3D images. Cards can either be printed or used on a second device.  Download flashcards here.

Journey through the past to the present. Discover the importance of math, on everything from building to farming to business as you travel through time in your quest to get home to Iowa. Learn history and even a second language along the way. What starts as a typical day in history class for Xitlali and José turns into a day nothing like any other. Find your homework. Get to school before the bell rings. And definitely stay away from that book your teacher told you not to touch! AzTech: The Story Begins teaches multi-step problem solving, basic statistics, and real-world applications of math while introducing you to pre-Columbian Central American history. The game is fully bilingual (English/Spanish).

Mr. Gonzalez told you not to touch that book! Now, you’re in the Mayan jungle. Use your knowledge of statistics and history to survive. AzTech: Meet the Maya can be played in English or as a bilingual English/Spanish experience. The language of instruction is controlled by the player on every single page within the game, including text, audio, and video content. The game is fully bilingual (English/Spanish).

We’ve been asked for years to develop a game for younger students. We listened. Counting by Two Languages is our first app for pre-school age and up teaches counting in English and Spanish. Kids will love seeing virtual numbers pop up in their real world in this new app from 7 Generation Games and Strong Mind Studios. Bring numbers to life in two languages in this interactive augmented reality app! Get the cards here.