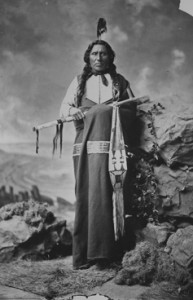 The Library of Congress (LOC) is an excellent resource for Native American research and information – and many of those resources are now available in a digitized format, including an extensive number of photos.

Here is an example of what you’ll find, but the site has these at much higher resolution

You can search LOC prints and photographs online catalogue to access these historical images. The URL for the site is: http://www.loc.gov/pictures/

On this page, we have also compiled LOC image lots that directly depict 19th and early 20th century Dakota people and life. (Please note: This is not an all-inclusive list, and the Library of Congress has additional lots on the subject.)

In searching for additional resources, you can also search by keywords (i.e. Sitting Bull, travois, Ghost Dance) and/or tribe names. (Tip: The LOC uses a single spelling for each tribe, for example, the spelling Ojibwa is used instead of Ojibwe for search. If a tribe you are searching does not yield any results, see if there are any alternate spellings you can try.)

Not all lots and/or all photos in a lot are yet digitally available, but most lots have at least some of their photos available online.

3076-3: Railroads, including construction and railroad camps in South Dakota and Wyoming;

3076-6: Cityscapes and commercial buildings in South Dakota and Colorado;

3076-15: Landscapes, buttes, and rock formations in the Black Hills of South Dakota and Wyo.;

Summary: Most images were taken on or near the Rosebud Indian Reservation in South Dakota. Images include the hitchlot at Rosebud Agency during the Crook Treaty Council; Sioux men and women butchering a steer and receiving beef rations; a Euro-American man reading the Declaration of Independence to a group of Sioux Indians at a 4th of July celebration; men and women participating at “Squaw Dance;” women and men cooking outdoors; women preparing dried beef; and a woman on a horse pulling a travois with a child in it. Also includes a portrait of Two Strike.

Summary: Stereographs of Sitting Bull [Hunkpapa Lakota] and other Sioux Indians at a campsite near Fort Randall, Dakota Territory. Images include issuance of supplies and rations; daily life and dwellings in winter and summer including inspections; a medicine tepee; women carrying wood bundles; portraits of Sitting Bull, alone and with his family; Eat Dog and his family; One Bull and Black Prairie Chicken; Steps, an Indian who lost his feet and hand due to frostbite; and a drill by the men of 25th Infantry Colored.

12321-A-Hidatsa: Portraits of men, women, and children, including a family portrait, most identified, most wearing traditional clothing; a man holding a bow and arrows; a man holding incense over a medicine bundle; a man praying; an Eagle Catcher (wearing eagle-feathered clothing) standing on a rock tower; a man holding a vessel (bowl) near the water as part of the ceremony of the bowl; images associated with Hidatsa legends including a stone, a tree, and home of the “water monster;” a winter tepee camp; a bull boat; and an abandoned village.

12321-B-Mandan: Portraits of men, women, and children, many identified; ceremonial figures and objects including Numak-mahana, Scattered Corn woman (keeper of sacred objects), a Buffalo dancer, an Okipe (Okipa) ceremonial Buffalo dancer, a man holding a buffalo skull to the sky, turtle effigy drums, contents of a medicine bundle, and a pictographic record of sacred turtle custodians; women gathering rush, picking berries, and paddling a bull boat; men standing on river banks; and an earthen lodge. 12321-C-Assiniboine: Portraits of identified men, some wearing fur clothing; a man holding an eagle as part of a ceremony; women setting up tepees; and tepee camps.

Summary: Predominantly studio portraits of Dakota (Sioux) men and women in traditional or mix of Euro-American and traditional dress. Other tribes depicted include Assiniboin, Apache, Kiowa, Tonkawa, Arapaho, Pueblo, Sac and Fox, and Siksika (Blackfeet). Sitters include Dakota chiefs Hollow Horn Bear and American Horse, and Apache leader, Geronimo. Also includes images of the Indian encampment on the exposition grounds showing Pueblo making bricks, Cheyenne and Arapaho doing the Ghost Dance, a Siksika (Blackfeet) woman and baby in front of a tepee, and a group portrait of the Indian Congress attendees.

Summary: Studio portraits of Rain in the Face, alone, and with his wife; Gall, Sitting Bull, alone and with Buffalo Bill; Sitting Bull’s children, Crow Foot and Standing Holy; and outdoor portraits of Sitting Bull’s family in front of his house and tepee. Also includes images of a group of Dakota grass dancers, cattle being slaughtered in a fenced corral for meal distribution to the Dakota, scaffold burials in trees, and Dakota and Euro-Americans gathered around Euro-American men at tables for census at Standing Rock Agency.

Summary: Formal portraits of individual men and women, including named tribal chiefs, and groups in native dress, with some Euro-American influences. Also numerous camp scenes, and groups with tepees or travois, and groups at a (treaty or council?) tables. Two images show what may be the Winnebago agent’s large frame house, with Indians lined up nearby.