Skip to content
Home » Blogs » 7GenGames » The Common Core and Me 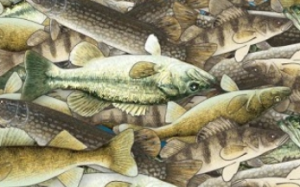 In designing Fish Lake, we have largely followed the Common Core State Standards and closely studied test questions from the various samples released to give schools an idea what to expect.

There are times, however, when Common Core and I are at odds.

For one thing, the assertion that one can only compare fractions when they refer to the same whole.

How does one define a whole? Obviously, the 1/3 of a large pizza is not equivalent to 1/3 of a small pizza – except when it is.

Let’s take one of the examples in Fish Lake. Grandfather asks the boys whether fishing is worse this year, thinking maybe the tribe will have to move somewhere else to find enough food. Last year, they caught 125 fish and 25 were over one foot long. They could fish all year, find out at the end of the year that they only had caught 80 fish and 10 of them were over a foot long and supposedly never be able to compare the two fractions.

Or they could go on a fishing trip, catch 16 fish, find that only two were over a foot long, compare the two fractions and conclude that the fishing seems to be worse this year.

One of the problems I have with the way fractions are taught is that so many of the activities are the same, showing shaded bars. In some cases, they expand and show shaded circles, which is actually a good thing, showing that, at least, fractions aren’t restricted to rectangles.

We try to show fractions in a variety of ways, with the shaded portions not together

Or sometimes filled up with frogs instead of shaded

It reminds me of an article I read (which I am sad that I cannot find again, so if you have the reference PLEASE post in comments), that found junior faculty had students who performed better on end-of-course exams while senior faculty had students who performed better in subsequent courses. The authors concluded that those more experienced teachers knew what students would need later on and focused on that as well as what was on the final.

I’m also certain that there are no shortcuts. People learn a new concept and have a sketchy idea about it. They encounter it again and it is a little clearer. Then, they see it from a different perspective and it is clearer still.

Won’t students get confused? Yes, sometimes. If we make it interesting enough for them, that confusion will result in them thinking about a problem and figuring it out.

Whether it is mathematics or mixed martial arts, the secret of success is doing a lot of it. You DO need to do a lot of the right things, but quality doesn’t make up for lack of quantity.

In spirit, at least, the Common Core and I are soul mates, because I really do believe that mathematics is something to be wondered about and, eventually, understood.