Dr. Erich Longie, our lead cultural consultant, testified in Grand Forks, North Dakota, this week on the issue of allowing Native American children to wear an eagle feather or bead their caps at graduation.  His testimony is reproduced below. 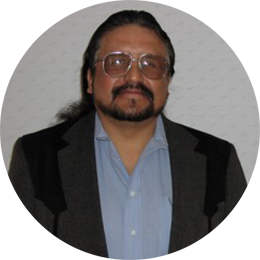 Instead, I want to talk about Indian Education and how it has evolved over the years to where it reached the point we are at now, standing here before you requesting permission for our Indian students to wear an eagle feather, or an eagle plume, or a beaded graduation cap during graduation ceremonies.

Over the years I have held many positions in education; I was a 3rd grade teacher, Adult Basic Education Instructor, Tribal College Academic Dean, Tribal College President and an administrator for an Early Childhood program. I love education and I promote it tirelessly. I see it as a way out of the poverty that is so prevalent on our reservation. But, there was a time when I hated education and everyone in it. Why? Because, it did not respect me for who I was as a person. It tried to make me into someone that I wasn’t. It wasn’t until I attended a tribal college where our culture was incorporated into the curriculum that I embraced the White man’s education. Let me tell you a little about Indian education and maybe you will understand why we are in front of you today, requesting that our highs school seniors be allowed to wear eagle feathers during their graduation ceremony:

For the past 150 years, when it came to education of Indians, your education system’s main purpose was to eradicate our culture and to make White men out of us. At first it was successful, but with devastating results. Without our culture we lost our kinship systems that held our families together, we no longer practiced our values of courage, honesty, perseverance, and generosity and our reservations became a very bad place to live. However, a few of us who remembered our culture began to teach it to others. As a result, today our culture is strong and vibrant, and getting stronger every year.

Sending Indian students to boarding school was the first attempt to stamp out our culture. We were told to forget our Dakota values of generosity, tolerance, honesty, and compassion and were taught the importance of acquiring private property and material wealth, two values that were the total opposite of what we believed in. We had to cut our hair and wear white man’s clothing, we were given English names, we were taught to use knives, forks, spoons, napkins and tablecloths. We spent countless hours marching to and from classes, meals and dormitories. The boarding schools hoped to produce students who were economically self-sufficient by teaching work skills and instill values and beliefs of possessive individualism, meaning that you care about yourself and what you as a person own. This was directly opposed to our kinship system where being a good relative, who looked after the young, the elderly, the less fortunate, was the most important thing in our lives.

I went to boarding school in the late 60’s during my high school years. It was a non-Indian school located 30 miles off the reservation. We boarded a bus on Sunday and came home Friday evening. Expectations were low. We, along with some Caucasian students who were outcast were segregated. We were all put in the same class and academically we were always behind our fellow classmates who were in different classes. We weren’t encouraged to join any extra-curricular activities except sports.

When I returned for my senior year I neglected to cut my hair like I did every fall before I returned to school. I had enough of following the White man’s ways as far as my personal appearance was concerned, so I didn’t cut my hair. At the end of that week, on Friday, right before school let out I was called to the principal’s office and told to cut my hair or not to return the following week. I returned to school anyway, without cutting my hair and after a stare down between the principal and myself, I was sent to class.

At our school reunion this past summer a fellow Maddock alumni who was a grade behind me told me how they used me as an example the year following my graduation. Apparently, several non-Indian boys grew their hair long and when they were told to cut it they pointed out that I was allowed to have long hair. They won their fight, by using me as an example. Through Facebook, I am now in contact with several of my former classmate, classmates that I barely spoke to while in high school. Many of them say they wished there was some type of diversity program when we were in high school, for now they regret not getting to know us Indians better.

When tribal colleges were started they demonstrated that we Indian people didn’t have to give up our culture to do well in school. Incorporating our culture into the curriculum is the norm not the exception. As a result, we have now reached a point where we have doctors, lawyers, engineers, nurses, etc., all because our tribal colleges realized we don’t have to give up our tradition to become successful in the White man’s world. For many of us, walking in two worlds in now the norm.

It’s not like we are totally against your system…in fact we have assimilated into the mainstream to the point that we now consider it our system also. As you have required, we have learned your language, we wear your clothes, we eat your food, and we go to your schools, most of us are willing to walk in two world with the majority of our walk in your world, but in our hearts we are still Dakota, Ojibwa, Hidatsa, Mandan, Arikara etc., we are still Native American with our own beliefs and spirituality that have existed for thousands of years. Not allowing our students to wear an eagle feather or bead their graduation cap is akin to the church not allowing pious parents to baptize their child because of the type of clothes they wear.

We have grown to respect your world, we learned your values, we try to excel in your education system, yet you do not make the effort to learn about us, and why our culture is important to us. For example, you say you are honoring us by displaying all kinds of Indian logos and mascots and dressing up in Indian regalia at their sports events, events where alcohol is consumed, where our customs and sacred regalia are mocked and ridiculed, all which is very demeaning to Indian people. Now you have a chance to really honor us Indians by allowing our youth to incorporate parts of their traditional regalia into their graduation gowns, but you won’t.

To put it another way, you allow racist behavior at sport events, while preventing our youth from proudly displaying bits of their cultural heritage at the most important event of life up to now. It just doesn’t make sense.

I think it’s time for the your educational system to meet us halfway. What harm is an eagle feather, or an eagle plume, or a beaded graduation cap going to do? It’s against your policy? Put aside those policies and procedures that are preventing our youth from participating in your activities simply because there are Indian and are different from you.

After all an educational system is supposed to make students feel welcome and accepted. Should these students be denied their right they will leave their school with a bad memory, something no self-respecting educator would want. Thank you for listening to me.