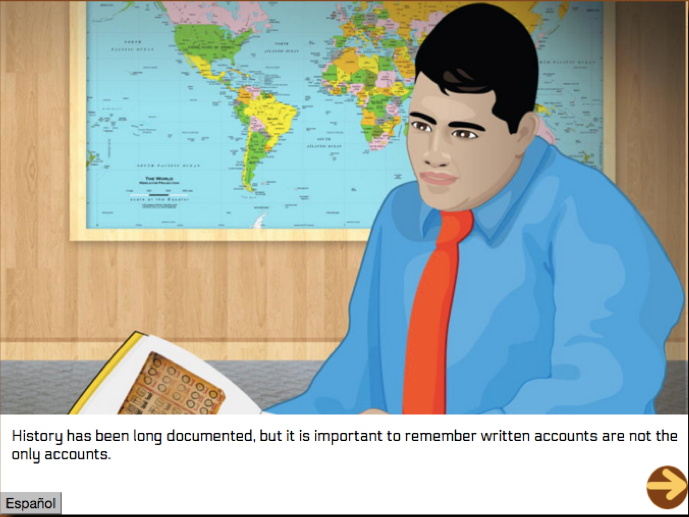 A scene from our upcoming game, AzTech: The Beginning.

History is written by the victors. Winston Churchill popularized this saying in the 1930s, and throughout time, there are many examples of winners writing history. As a result, official records of what happened can be distorted.

For the whole story, we have to read someone like Howard Zinn, who wrote “A People’s History of the United States” from the perspective of “America’s women, factory workers, African-Americans, Native Americans, the working poor, and immigrant laborers.”

The United States is a diverse country. The face of America and the conception of American identity has evolved over centuries. Now more than ever, it is important to embrace our diversity. Susan J. Barkman and Hannah L. Speaker explain the benefits in this article for the University of Arizona:

Valuing diversity recognizes differences between people and acknowledges that these differences are a valued asset. Multicultural education is an important component of valuing diversity. It respects diversity while teaching all children and youth to become effective and participating members of a democracy. It respects individuality while promoting respect for others. It emphasizes the contributions of the various groups (e.g. ethnic, gender, income, sexual orientation, etc.) that make up the population of the world. It emphasizes the importance of people sharing their stories and learning from the stories of others. It acknowledges that different children have different learning styles. This approach seeks to increase diversity awareness, sensitivities, and skills so that young people are prepared to take positive action with their peers. By building positive peer influence, young people begin to change negative attitudes, perceptions, and behaviors about diversity.

At 7 Generation Games, we understand the value of diversity and use multiple perspectives of history to teach math and social studies in English and (in just a few weeks!) Spanish in our educational video games. We work with tribes to build out Native American histories, ensuring our games are accurate representations of history and culture, often from voices and perspectives glossed over or completely left out in history textbooks.

We realize history is not just one set of views, reported by the winners. As the teacher in our upcoming game, AzTech: The Beginning, reminds his class, “History has long been documented, but it is important to remember written accounts are not the only accounts.” History is combination of stories, perceived differently through many viewpoints, and we can learn more from the shared stories in school, business and life.

Looking for games with quality cultural content that effective teach math? Get them here!