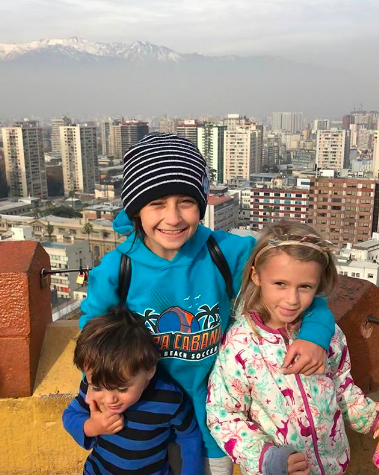 We have been in Santiago for two weeks now, fully – well, mostly – immersed in Spanish, and her Spanish comprehension has improved probably 10x in that time. Her spoken Spanish – which she never used before besides maybe “si” is probably 100x improved in that she can now say 100 words.

“Why is it ‘el refrigerador’ but ‘la mujer’? They both end in R. And why does almost everything that ends in ‘a’ go with ‘la’, but then it’s ‘el problema’ or ‘el dia’?” she wanted to know.

As has been the case on a number of occasions through my decade as a parent, the answer is “I have absolutely no idea.” Honestly, it makes no sense to me either – nor for the record do any of the native Spanish speakers that I asked have any real understanding as to why either.  Language – unlike math – isn’t always logical.

If you’re not a Spanish speaker or haven’t taken Spanish, what she was referring to is the gendered articles that proceed nouns in Spanish. For example, you might say “the book” or “the chair” in English, and “the” is the same regardless. But in Spanish, the “the” reflects the “gender” of the word. For example, book – libro – is masculine – therefore, it’s “el libro”. Chair – silla- is feminine so it’s “la silla.” If a word ends in “a”, it’s usually feminine, but not always. If it ends in “o”, it’s usually masculine. And if it’s ends in other letters, it’s – well, you basically have to figure it out.

According to Google, it’s because some Greek-derived words end in “a” or at least their Spanish-language versions do, yet they’ve kept their Greek gender. Which honestly is not the kind of thing anyone is going to know off the top of their head.

As with learning anything, when it comes to learning Spanish (or English or any second language), it’s just about exposure to the concepts or terms – repeatedly. It’s about surrounding yourself with resources – whether it’s people, apps (both my mom and my daughter really like Babbel), amazing educational games or even, yep, Google – that can help you navigate and find the answers. It’s about getting it wrong, but trying anyway. It’s about being willing to at least try – because that’s the only way you’re going to improve, whether we’re talking about pronunciation, flubbed conjugations or misused articles.

And let’s not pretend English is ANY less confusing.