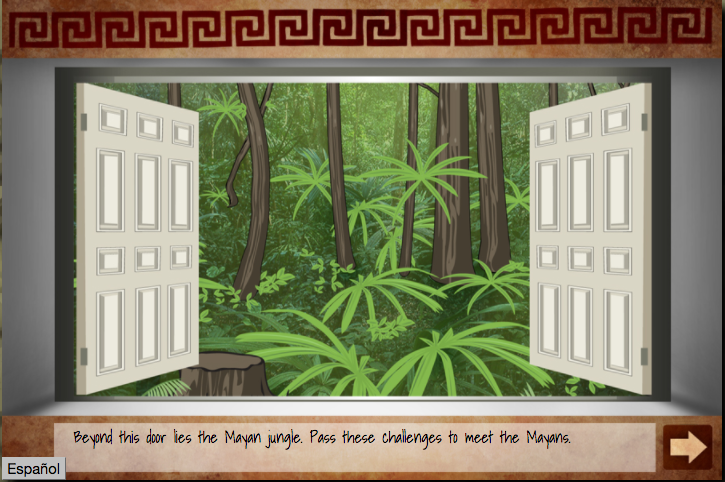 “Beyond this door lies the Mayan jungle.” These are the words that greet players of our game AzTech Games as they find their characters transported back in time. They felt especially fitting today as AnnMaria and I found ourselves quite literally in the middle of that very same jungle today. We were heading to the Belizean capital of Belmopan (tomorrow’s blog will be on the overall purpose of the trip) when we saw a sign for the Belize Zoo. Swayed by the very convincing tagline of “The world’s best little zoo,” we pulled over with absolutely no idea as to what to expect. (Well, technically, while scanning a brochure in the lobby of the hotel where we stayed upon arriving in Belize City the previous night and before heading to Belmopan, I was pretty sure it had said something about all the animals at the zoo being native to the country, but that was the full extent of our collective knowledge.)

Fortunately for us, the zoo was on the right side of the highway – the German man from the rental car agency had given us a long lecture on the dangers of making a left turn on the highway – so we pulled in. I wouldn’t say I am a zoo expert, but I have been to maybe 25 or so zoos in my lifetime in probably 10 states and 5 or 6 countries, so it is with a bit of reference that I say the Belize Zoo was a nice little zoo, certainly worth stopping by if you happen to be literally driving right past the entrance. It reminded me a bit of the Healesville Animal Sanctuary outside Melbourne (but a much smaller, Latin American type). 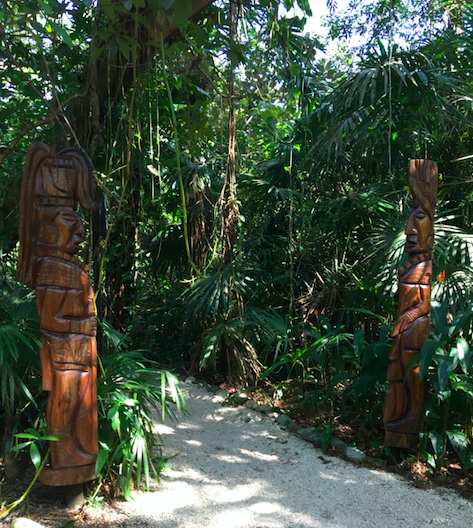 However, it was once we were inside that we really started to get excited. You see it started with a pair of carved wood figures that were kind of guarding a path heading into what was surrounded by jungle. So we took a picture of them and kept walking. Now part of what we were hoping to get here in Belize was reference art. You see, we’ve talked a lot about our commitment to accuracy before – and we really mean it. For example, the artwork backgrounds in Fish Lake and Spirit Lake are drawn from images AnnMaria took on and around the Spirit Lake and Turtle Mountain reservations in North Dakota. And let’s just say on our first real day of being in Belize – in large part due to our stop at the Belize Zoo – we got some amazing ideas and images that will go into our upcoming games. 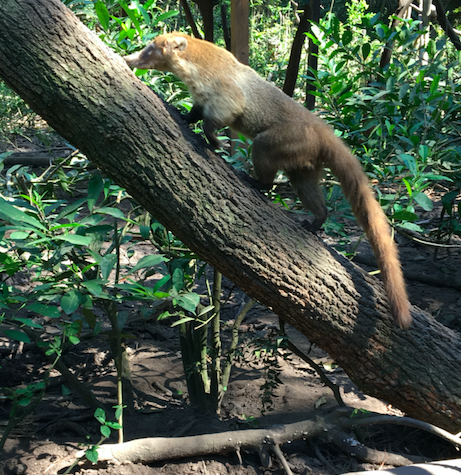 When AnnMaria and I walked by the coatimundis, we thought, these would be cool to include in AzTech – either the expanded version of the game or the Making Camp version or (since we try to make the most out of everything we do) both. You see, looking for ways to expand our games – as it make the levels longer and possibly less linear – we’re constantly looking for cool ways to do that. We got some up-close shots (through the use of zoom from the other side of the fence – I don’t have a death wish!) of a jaguar. We got sounds of a harpy eagle. We got images of jaguaroundi and ocelots and jabiru storks with 8-foot wingspans and lots and lots and lots of jungle foliage shots. (Honestly, as we were walking through and I found myself recognizing a surprising number of the animal names based on my oldest daughter’s one-time love of “Go Diego Go,” and I couldn’t help but wonder if this was the same place the show’s writers came for inspiration – a reference you may only get if you have small children.) As we walked through the zoo and on the rest of the ride to Belmopan, we discussed ways that we could integrate what we captured into our future games. I have no doubt that our games will be better and richer and deeper creatively because of this trip. Because honestly, we probably would have never thought, “Hey, let’s add some coatimundis.” And now we will – thanks in part to “the worlds best little zoo.”

One thought on “The Belize Chronicles: Always Stop at the Zoo”