Going through our archives, we came across this great post by Dr. AnnMaria De Mars from February 6, 2015 “Life of a Lie” that we wanted to share in case you missed it the first time around.

Sometimes, I’m a slow learner, but I do learn.

I know people who have fake black belts. Yes, they do have a certificate, but it was given because they donated a large amount of money to some organization or signed up all of their students as members. They aren’t any better at arm bars than my granddaughter’s fish, Nemo, and he doesn’t even have arms. Deep down, they must know they are fakes, and *I* certainly do.

I know people who have fake degrees. Some of them call themselves Dr. although they never finished their dissertations. Others have a certificate from the Fly-By-Night School of Witchcraft that says they are a Doctor of Heebie-Jeebie Medicine or some bullshit.

They know they didn’t take any real courses.

In both cases, though, I have had people say  to me,

“Yes, I know the organization is a complete fake but I think that I am good enough/ smart enough that I deserve to be a doctor/ black belt/ minister.”

Slowly, I have realized that associating with those people is NEVER a good thing. They are telling lies. There is a reason that degrees, black belts and other credentials matter – because they provide some objective, external standard of our awesomeness.

Lots of people believe themselves to be the greatest in the world. Then, we have a competition and one of them wins. Some of those people who thought they were best in the world lost in the first round. Some never even qualified for the tournament. What difference does it make if they go around telling people that they won?

The difference is that it lets you know telling lies doesn’t bother them.

Everyone tells lies sometimes, right? They blame traffic for being late when the truth is that they had completely forgotten they were supposed to meet with you until they got your text.

The difference is that if they are claiming a degree they don’t possess to get people to take their classes, become their clients or believe their arguments then their LIFE is based on a lie.

The same is true if they are addicted to alcohol or drugs, a compulsive gambler, having an affair.

“Where did you get your degree?”

Must be answered by a lie.

“What year did you win the national championships?”

“How many drinks did you have?”

“Why weren’t you at the Hall of Fame dinner?”

What difference does it make? It make several differences, actually.

If someone around you is lying about important parts of their life, as well as trivial details to support those lies, it makes lying seem normal. When people are around you, it’s easy to let yourself start thinking, “Everyone does it.”  Let me assure you, NOT everyone does,

When you hang with liars, it drives the good people away. There is guilt by association, when it’s just assumed you are a liar, too. Then, there are the people who think you are probably a good person, but they don’t want to spend time with a bunch of frauds that hang out with you.

Statisticians know that the best predictor of future behavior is past behavior. We already know they lie about both important and trivial things. It is only a matter of time before those people lie about things that are important to you.

If you find yourself asking,

“What difference will it make to Ignatz Billy Joe who claims to be Ph.D. in Lunar Geology and a seventh-degree black belt in every martial art ever invented if I quit taking free tickets to sit next to him at the Annual Hall of Fame dinner?”

A young person of my acquaintance asked,

“Doesn’t that bother you, though, that someone can go through life lying about their credentials, pretending to have a Ph.D. or a gold medal or a ninth degree black belt and get away with it?”

The answer is, that they don’t get away with it.

First of all, unlike people like me (and, I hope, you), they have to worry constantly about getting found out. Did anyone at dinner catch that they mentioned living in Iowa in 1986 when they had told people at dinner last week that they were in medical school in 1986? Do any of those people know each other? They’ve been telling people that they won the 1970 National Championships in Ukraine but now those records are on the Internet. Will anyone they know see them?

Most of all, as my friend, Serge says,

“Those people have the worst punishment that you can imagine. They have to wake up in the morning and be them.”

Help your kids with fractions. Canoe through the rapids and beware of poisonous snakes all while learning fractions. Buy Fish Lake today! 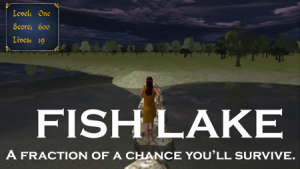