Going through our archives, we came across this great post from July 02, 2014 “Self-Employment and People with Disabilities” that we wanted to share in case you missed it the first time around.

I’m looking forward to speaking at the Turtle Mountain Disabilities Conference and not just because they have one of the best conference logos I have ever seen.

This topic reminds me of a joke my friend told me. His specialty is geriatrics and one day one of his patients came to him and asked for Viagra, which if you have watched late night TV in the past 10 years you might know is a, um performance-enhancing drug, for men .  Jake said, to him,

“Sir, you don’t need medication. I’ve met your ex-wife, and believe me, she didn’t turn me on, either.”

What does this have to do with self-employment? Someone asked me why I am always talking about employment for people with disabilities. Don’t I know how high the unemployment rate is? Don’t I know that it’s far higher on reservations? Don’t I know that many people, maybe most, aren’t interested in working? And that reminds me of this clip from a podcast I heard recently.

You will spend 8 hours a day doing some task that could be done equally well by a machine – handing a cup of coffee to strangers, mopping a floor. It will present few opportunities for you to grow, physically, emotionally, mentally. You won’t make enough money to buy a home or many of the other things you might like to own. You’ll probably take public transportation to get there and back because you won’t be able to afford a reliable car. After working all day, you won’t have much time or energy on the weekends to do the things you like, whether it is hunting or going to the movies and you won’t have much money to do those things either, so you’ll probably just watch TV.

That will be your life – hand out cups of coffee , ride the bus, watch TV – and you’ll continue doing that until you die or they find a machine that can do your job cheaper and fire you.

How can anyone turn down an offer like that?

I want to talk about self-employment from a personal perspective. I’m not funded by any grant that promotes starting a business so I’m not going to pretend that it’s any easier than it is. On the other hand, I started my first business in 1985, as R & R Consulting, and recently incorporated my fourth company, 7 Generation Games, so it is possible.

What I hope to achieve  is to convince more people that self-employment is a very realistic goal for many people with disabilities, although it’s not for every person with a disability, just like it isn’t for every person without a disability. Just me getting up and saying something once is probably not going to make a difference for many people, if anyone. What IS going to make a difference is the people they see every day, their parents, friends, relatives, counselors or teachers. Those are the people I hope to convince as much as the people with disabilities themselves.

The first thing you need to start a business is …. Stop and think to yourself, what do you really need? Go ahead. I can wait. Email or text a friend and ask. You’re already reading this on some sort of electronic thing-a-ma-jig anyway. I’m going to tell you a few stories, during which time you will probably conclude I have forgotten my point entirely.

When I was young, my whole life was partying and sports, occasionally interrupted by school. Back then, I wondered what old people did when they had too much common sense, responsibilities and aches and pains to be running around. Now I know. They sit around with their friends and talk about life, the problems in the world and how all of them could be solved if people just listened to us. At least, that’s what Willie Davis and I do.

Lately, we’ve been discussing why is it that some people with disabilities become so successful while others are far from meeting their goals? We don’t know the answer to that question, but I’m scheduled for 45 minutes, so I’m going to talk about it anyway. 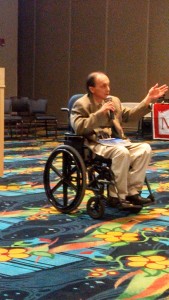 Who has a disability? Is it one of those things like art, where you know it when you see it? Not so much. This was brought home to me in a couple of examples. Willie and I were discussing the lack of disability advocates on reservations and how that may be due to not many people with disabilities having the education and experience to be involved in activities like running a conference like this. We were trying to think of someone at Spirit Lake, and after a few minutes we realized, oh yeah, Erich Longie is a vocational rehabilitation “success story”. Now, maybe if you just walked by Erich in the airport when he was walking with two canes because he had a really long way to go through the terminal, you’d think, “There goes a person with a disability.”

However, I can guarantee you would never think of that if you knew him. Willie and I have both known Erich well over 20 years, he’s one of my best friends, I was at his graduation when he was the first enrolled member to receive a doctorate, he was my boss when he was tribal college president, we founded a company together and when asked to name someone on the Spirit Lake Nation who had the education and experience to be a disability advocate – I didn’t think of him.  Neither did Willie, so it’s not just me. 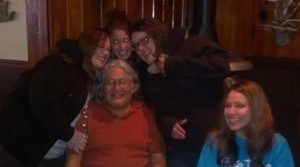 If you know Erich, when you think of him, probably one of the first things is he’s very family-oriented. He was a single father for many years, and now he’s raising his grandchildren. He was a major force in the fight against the Sioux nickname. He’s been quite politically involved over the years, particularly in education, as school board president, member of the tribal college board. He’s been immensely involved in American Indian education – adult basic education instructor, Even Start Director, elementary school teacher, college academic vice-president, written a masters thesis and dissertation on issues in Indian education, published articles in academic journals. He’s an avid pool player, drives like a stunt double for the Dukes of Hazzard (or Grand Theft Auto, if you’re too young to remember that), he’s survived the Marine corps, cancer, alcoholism, the death of his son and an exceptional number of ex-wives. All of this maybe explains why it took Willie and I about twenty minutes of trying to think of someone with a disability to say, “Oh, yeah, Erich was in a car accident and walks with a cane, sometimes two.”

Erich is unusual, but he’s not unique.

A few months ago, an old friend came to one of my daughter’s fights. Tina took the 4 a.m. bus from Los Angeles instead of flying out the night before because her mom had the flu and she wanted to make sure she was all right before she left town. Let me tell you a few things about Tina. She is a vocational rehabilitation counselor, has a black belt in judo, she is going back to school to get her PhD. – and she is always late. I’m always late, too, so if I KNOW that you are always late, it means you are getting there after me, so you must always be REALLY late, and she is.

Not long ago, someone asked me who I was waiting for, and I said,

“My friend, Tina. You know her right? You know what it is about her?”

The other person just went off,

“Oh, yes, she’s blind, right? I just think she is so inspirational. It’s so amazing how she lives in her own home, travels the world, graduated from college. She’s just so inspiring. Is that what you were going to say?”

“No, I was going to say that she can be kind of a pain in the ass how she complains about everything and she’s always late, but you’ve kind of ruined it now.”

I told Tina this later and she agreed,

I didn’t find it particularly inspirational that Tina got on a plane and went wherever she wanted to go any more than I found it inspirational that Willie Davis is part of a group that organized a conference that is now a model for events on other reservations or that Erich Longie earned a doctorate. They are all smart, hard-working people. Why wouldn’t they do these things? I need to take a plane to get to the conference that’s held in Belcourt, North Dakota and no one was inspired by me and said, “Ooh, look at her, she managed to get to the airport.”

There is a point here, other than that possibly I’m not the best friend.

So, here is my other question … What is a major factor in successful employment of people with disabilities?

One of the reasons that all of these people who I mentioned are successful is that they are surrounded by people who don’t just expect them to be successful but take it for granted.

Whether it is South Dakota, Washington, D.C. or Alaska, if Erich and I are doing a presentation together, I just assume he will show up and do his part. When I came to Belcourt, I had no doubt that I would be on the program, the conference would be well-organized, I would have my hotel room reserved. I got mad at Tina for being late all of the time because I knew she could do better.

These examples show two parts to being a success. One is not letting your disability define you and the other is being around people who don’t either.

You might say education is a major factor in success. Yes, everyone I mentioned has a degree, but they didn’t start out with an education. They DID start out with the assumption that they could go and get a college degree.

So, am I saying that all people – with or without disabilities – need to be successful is a positive attitude?

That’s certainly not all they need, but it’s a good place to start.

If you majored in psychology and were in argumentative mood, you might argue that there is a lot of research that shows that attitudes do not predict behavior very well. You could point to people who say they want to lose weight, get a job or any of a number of other goals and yet who take no steps toward  meeting those goals. What about THAT, Dr. Smartypants?

I’m glad you asked that question. Tune in tomorrow for the answer.