Going through our archives, we came across this great post by Dr. AnnMaria De Mars from April 14, 2013 “Vacations can be amazingly productive” that we wanted to share in case you missed it the first time around.

It has been pointed out to me that when other people take two days off in a row, it is called “The Weekend”. However, I don’t really have any hobbies except for judo, which I teach a couple of times a week. I like hiking in the mountains, but that only takes a couple of hours since we live less than a half hour from the Santa Monica mountains. So, for example, on Wednesday I walked up to the graduate library at the top of the Pepperdine campus in Malibu, passing this deer on the way, but it didn’t take that long and there was still the rest of the day to work.

While I’m perfectly happy with my life, unfortunately, the last few weeks of trying to fix everything on the game has taken its toll and my elbow hurt ALL of the time. The Invisible Developer insisted that we take off somewhere and I leave my computer at home. So, we went wine-tasting in the Ojai valley for two days. Here is the funny thing, though. Without my computer, I worked on the game a lot and made huge progress. I sat out in the backyard of the cottage and wrote (yes, with pen and paper) out several of the math challenges, several parts of the game, sketched out the logic for the program and even wrote a bit of the code by hand. Without twitter, Facebook, email or blogs to distract me, I got an amazing amount done. Since we were near The Spoiled One’s school, she came in the evening to relax and do her homework away from the dorms. She thought it was a great idea and that we should do it every week. While that may be a bit much, and I’m pretty certain the wine cannot be deducted as a business expense, we’re planning another computer-less weekend this summer. There is just one thing I haven’t figure out, though? Why DO they knit sweaters for the trees in Ojai?

WE MAKE GAMES THAT MAKE YOU SMARTER 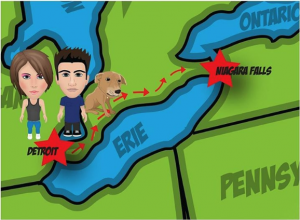 BUY OR DONATE OUR GAMES HERE