Welcome to 7 Generation Games’ blog post, if this is the first time you’re with us, we invite you to follow us on our social networks to find out about educational games, technology applied in teaching and more.

HOW DOES THIS AFFECT CHILDREN?

According to Kidshealth.org, although it is not always easy to recognize stress in children, short-term changes in behavior, such as mood swings, bad behavior, changes in sleep patterns or wetting Bed, may be indications. Some children experience physical effects, which include stomachache and headache. Others have trouble concentrating or finishing homework. Other children are abstracted or spend a lot of time alone.

Younger children may show signs of reaction to stress by adopting new habits, such as sucking their fingers, curling their hair with their fingers, or measuring their fingers in their noses. Older children can start a lie, assault other people or challenge authority. A stressed child may also have nightmares, difficulty leaving his side, exaggerated reactions to minor problems and radical changes in academic performance.

THE USE OF VIDEO GAMES AS A TOOL AGAINST STRESS

Stress is a natural response of the organism, vital to deal with environmental situations that may pose a danger or the need for situations. The stress response involves intense changes in our bodies. Among them, chemicals such as adrenaline and cortisol are released, the sympathetic nervous system manages an increase in the cardiac and respiratory rate, and blood glucose levels increase. We also know that stress can modify brain anatomy by destroying brain connections.

“In 2009, the Journal of Cybertherapy and Rehabilitation published a study on the positive effects of playing popular video games on health. The researchers recorded the electroencephalographic activity and the variability of the heart rate of a group of people while playing different video games. When comparing the results with those of other participants who did not play, they found two fundamental findings. On the one hand, changes in the alpha activity of the frontal areas of the brain were associated with better mood and mental relaxation. On the other, a lower heart rate that was interpreted as a lower response of the autonomic nervous system and lower physical stress, ”says the website muyinteresante.es

If you are going to give your child a videogame, let it be educational. That way he learns and has fun at the same time.

With the AzTech bilingual games series that teach math for children in 5th and 6th grade, integrating Latin American history.

You can play them on cell phones, Android and IOS tablets or in their web version, find them below:

Get it in the app store for iPhone and iPad 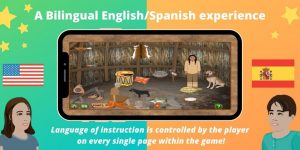 Remember that in all our mathematics are interactive, with drag and drop functions, number lines and graphs. In addition, we are expanding the games to run on all platforms: currently, all our games work on Mac and PC, 75% run on Chromebook and 75% run on iPad (by the beginning of the year 2019-2020, we will have all games running on each device).