I do want to talk about virtual reality, though. I was reading on twitter comments from people who said,

“There are only two kinds of people: those who think virtual reality will change the world and those who haven’t tried it yet.”

I beg to differ.

Maria just got back from the Game Developers Conference, so she maybe can go into more detail on why we think Google cardboard will be a bigger deal for educational games than Oculus Rift (*cough* money *cough).

My bone to pick with the VR-is-everything crowd, though, has more to do with the assumption that ANYTHING will be attractive to EVERYONE. This is where the sex part comes in. I think sex is a pretty awesome idea (I do have four children, after all, and they are not adopted). I would think that sex is so awesome that everyone would want to get in on it. Turns out that not everyone wants to have sex (who knew?)

Of the people who want to have sex, some decide not to do it because they think celibacy is more important for religious or other reasons. Personally, I’m 100% in favor of sex with men (hence, the four children) and think it is a pretty good way to go, less than half of the population seems to agree with me. 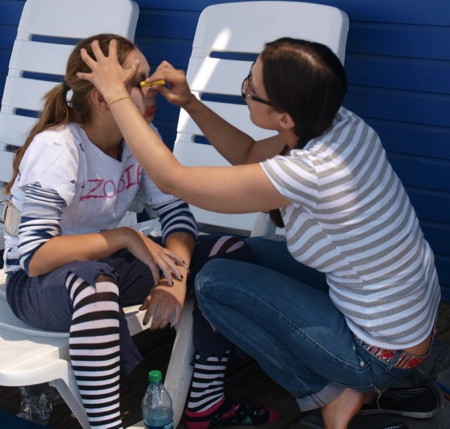 Two of the children I produced by having sex

My point is that there isn’t even unanimity in having sex for God’s sake, so you think there’s going to be a unanimous desire for some kind of headset?

My argument is not that virtual reality sucks or that people who do it are losers. I just think those running around saying it is going to be everywhere have fallen for Second Life Syndrome – which I just made up so I get to define it – the belief that what you think is awesome, everyone else will, too.

Let me give you a non-sexual example. Last month, I was visiting a friend who has a 15-year-old son, let’s call him Bob. His kid is intelligent, articulate, friendly and just an all around opposite of the basement dwelling stereotype of gamers, which is a stupid stereotype.

While I was visiting, I was working until 2 a.m. on improving our games, which is what I am always trying to do. Bob stayed up until 1 a.m. playing Call of Duty and then some other, similar game, because, hey, it was Saturday night and he is 15.

Glancing up and watching him from time to time, I thought it really didn’t look that interesting. When I asked Bob about the games, he gave some pretty good analysis of what made a good game and how the ones he played did or didn’t meet those criteria.

Based on the fact that not everyone can even agree that they want to have sex, much less which video game is entertaining, I am a little skeptical of the arguments that EVERYONE is going to be drooling over virtual reality.

As for us, we are working on implementing augmented reality into our games and beta testing in schools next year. (Hit me up if you are interested in being a beta tester. I’m at CUE in Palm Springs this week and at NCTM next month. I’m not hard to find. Maria will be at CABE in San Francisco also).

Maybe I am completely wrong to take this tactic and virtual reality will end up being more popular than sex with men – but I doubt it.

If you do want to try out augmented reality, though,

and another augmented reality game  in English and Lakota

One thought on “Virtual Reality and Sex”