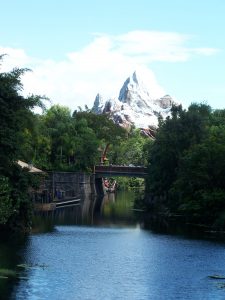 Last year, I was at Universal Studios, looking at a second-story window. Last month, I was at Disneyland thinking about the same thing. Did you ever think about why you pay so much more for a theme park than say, the fair your kid’s school puts on? Both have rides and booths with games. Why do you shell out $80 a person for one and not the other? What makes one a much bigger deal? In part, I think, it is the attention to detail. If you look around any theme park you’ll see thousands and thousands of details someone attended to in order to make you believe you were in a magic kingdom or  on a movie set. Even though that window was in a facade, and no one could go up there, and the odds of anyone even looking up there weren’t that high, it had curtains and decorations in the window, just in case.

A while back, it was one of those management cliches that made you just want to punch the manager saying it in the teeth,

It’s actually a very good saying, despite being overused and often espoused by people who could not tell you if their life depended on it.

I can tell you what it means to us. Imagine you are a child playing our game. Yes, you are learning math and you need to come up with the correct number of hunting parties you can make from 51 hunters when there are 8 hunters to a party. If you get that wrong, you need to study. You can select from a memory game where you match cards that have a problem and solution, or some of the cards have artwork from the game. Powwow music is playing and you need to finish before the music stops. It’s just a little better than flash cards.

Or, you could solve division problems with refrigerator magnets because, well, why not?

In short, on a daily basis, we thought of what could make the game a little more fun, whether it was having deer feeding along the path you followed or a movie with burning tipis and a mournful soundtrack when you got the wrong answer about the number of attackers.

The beta version is going to be released next week and we still have a long list of additions and improvements before our commercial release in the fall – add music as they are jumping over the pits, add different music as they are going through the woods, have an eagle fly in here, add more options for studying division, etc.

We are really looking forward to hearing from all of our beta testers about what they would like to see in the game to make it more fun and educational.