Maria Burns Ortiz of 7 Generation Games was only U.S.-based company to win category round. 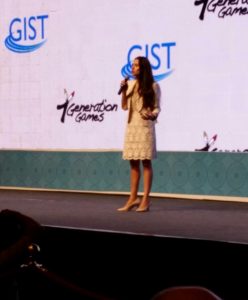 The top finisher in the Media & Entertainment category, Burns Ortiz represented the only U.S. based company to advance to pitch its enterprise in front of 1,500 attendees from nearly 150 countries at the GES closing plenary and over the event’s livestream on November 30.

The GIST pitch contest was held as part of the 2017 Global Entrepreneurship Summit, a three-day gathering of global entrepreneurs hosted by the Government of India and the U.S. State Department.

Combining educational research, game design and artificial intelligence, 7 Generation Games makes video games that teach math in culturally relevant context – in English and Spanish. The startup, based in Santa Monica, Calif., develops games optimized to meet technological needs from urban centers to rural and network limited communities with the aim of closing the math performance gap, both in the U.S. and expanding internationally in 2018.

Co-founder and CEO of 7 Generation Games, Maria Burns Ortiz is working to create a better future through better educational games. Taking 7 Generation Games from concept to award-winning company, she oversees all creative aspects of game development, including design, narrative and artwork. Maria’s business development focus is on strategic partnerships and international markets. A mother of three and a N.Y. Times bestselling author, Burns Ortiz was named the National Latina Business Woman Association of Los Angeles Rising Star of 2017.

The pitch contest was only open to companies participating in the invite-only GES summit, nominated and invited by the U.S. State Department, Indian Government and U.S. Embassies. From the more than 75 startups that applied, 24 advanced to the live semifinals based on a combined score of public vote and expert judges. In the semifinal round, companies competed against others in their same focus industry for the chance to advance to the overall final, in front a panel of executive-level judges from leading tech companies including Google, Amazon, AirBnB, Dell and more.

For more information or for an interview, please contact info@7generationgames.com.