Often, I get asked how our games can be used in schools. Even more often, I have the opportunity to go into schools and see how they are being used, which is fascinating to me because teachers frequently have uses that had not occurred to me when the games were designed. 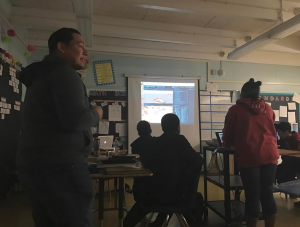 Listed below are 13 ways you can use our games.

Seems pretty obvious, right? Especially since that was our original idea and our idea seems to have worked pretty well. We developed 4 games that are currently on the market.

Spirit Lake: The game – teaches multiplication and division. The characters are Dakota and the story line follows the adventures of two Dakota children from 250 years ago.

Fish Lake – teaches fractions, and is based on the story of the Ojibwe migration.

Making Camp – teaches multiplication and division. Runs on Chromebooks, tablets and any computer. Also teaches about Ojibwe history and culture.

Forgotten Trail – teaches middle school statistics standards and Ojibwe history. Lessons on other tribal history and culture to be added.

With these games, we developed a test used to assess students’ math level before beginning to play the games. They take the test again after 8-10 weeks or however long it takes them to play through the games. There is one test for Spirit Lake and Making Camp, a second test for Fish Lake and a third test for Forgotten Trail.

In studies we have conducted, students show significant improvement from pretest to posttest. How do we know it was not just they got practice taking the test? One of those studies had a control group that did not play the games and the group that did play improved their math scores 3 times as much. In another study, we correlated how much the students played the games with their improvement and the classrooms that played more improved more.

It would be good if we had more controlled studies with randomly assigned experimental and control groups. It would be nice to have more classrooms acting as control groups period. In general, though, teachers feel as if too much class time is taken already for testing and preparing to test so they are not interested in taking half of two class periods to administer the test twice. If you WOULD like to be one of those control groups, though, shoot me an email and that will make me tap-dancing happy. I will even post a video on YouTube of me dancing. (Sorry, I don’t own tap shoes.)

How the games work :

A video plays that sets up the story, for example, there is an epidemic and you need to go into the woods to find the herbs needed to make medicine (Spirit Lake) or there is less food, the tribe needs to move (Fish Lake). Then, you go on a ‘quest’ walking in the woods in the virtual world, canoeing down the river. Questions pop up – if it is 160 miles and you need to meet your uncle in 8 days, what is the average number of miles you need to walk each day? If you answer the question correctly, you continue in the game. If you answer incorrectly, you get a second chance. After two wrong responses, you get sent to study. You can choose how you want to learn – watch a video, read a web page (or have it read to you), do an activity, like a memory game with math problems and their answers. In most cases, after studying, you need to pass a quiz to go back to the game.

Basically, if you think of any common game you’d play on the Wii, PlayStation, Xbox or on Steam – Legend of Zelda, Super Mario Brothers, etc. it’s kind of like that with math problems and instruction added.

Making Camp runs on iPad and Android tablets. Some people even play it on their phones. It also runs on Chromebook and in any browser on a computer. Players watch a video or do an activity that teaches about a math or social studies concept. Each one earns them points that they can trade to ‘build’ and customize a wigwam. Think of FarmVille or Tiny Monsters or Dragon Vale but teaching Native American history and math. So, instead of annoying your friends to give you things you learn something to earn items. Kids playing this game have given us dozens of ideas, so look for more options soon.

Occasionally, a teacher will ask me how I know it is the game itself that teaches students and not that the students pay more attention to the teacher, are more motivated to do their homework so they can get ahead in the game.

I don’t know, and honestly, I don’t care. In fact, I know that some teachers do use the games to get students to pay attention. I’ve observed classrooms where the teacher said,

“All right, boys and girls, how many of you are on level 4 of Spirit Lake? Well, when you get to level 4, you’re going to need to divide. If you don’t know how to divide, you’re never going to pass it. If you can’t figure out division, you’ll be one of the hunters left behind and you’ll never get to go on the buffalo hunt.”

You can find our games here. Starting at free (!) up to under ten bucks. Check them out and get smarter! 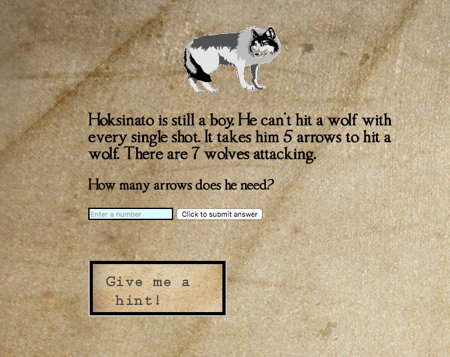