Skip to content
Home » Blogs » Parenting Like I Know What I'm Doing » A Wad of Cash and the Keys to Startup Success, Or Things My 9-Year-Old Gave Me 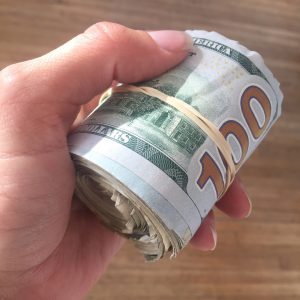 Sometimes, you find inspiration in the most unlikely of places. For me, today, that was in a giant wad of cash. Let me explain.

The first of every other month, I write our bimonthly investor report. In it, I update our investors on all of the things that are going on at 7 Generation Games to show them that we’re hard at work building our company with the money they invested in us and that we’re not blowing the cash on stupid things like customized ping pong tables for each member our 18-person staff or hoover boards for everyone or whatever ridiculous things you hear about startups spending wads of cash on. I also include key metrics – like our user numbers (which keep going up, yay!), our revenue (which is up and down and up, but not nearly as up as I’d like it to be) and a couple other key numbers that show our progress.

As a startup run by a pair of people with very Type A personalities (I’m like Type AAAAA and my cofounder AnnMaria is probably Type A to the 80th power), we never feel like our progress is where we want it to be. In some ways, doing our investor reports have been a good way to see our growth – for example, we more than doubled our number of users in the last year. But we’d like to see it 10x – right now. Revenue is going up, and a slow month now, would have been a great month a few years ago. Forget 10x, in the case of sales, we’d like to see sales go up by 100x. And I don’t think either of those are impossible. However, it’s one of those things where I know it’s just going to take time – but could that time just finally get here? Which brings me to the wad of cash that I found myself carrying around all day. Unfortunately, it was not due to a surge in 7 Generation Games sales – yet. [You can help change that by buying our games here!]

The reason I was carrying around over $1,000 in a wad of over 100 different bills was because eventually hard work and effort and patience pays off. Here’s what I mean: Three and a half years ago, my now 9-year-old started saving money in a pickle jar. Her early crumpled bills smelled completely like pickles. She didn’t initially know what she was saving for, she just was saving. Then one day, she decided she wanted an iPhone. My husband and I – being reasonable, sane people – said, “You’re five, there’s no way we’re buying you an iPhone.” And our daughter said, “Fine, I’ll buy my own.” However, we didn’t think much of it, because she didn’t have a job and small children aren’t well known for having financial acumen and restraint. 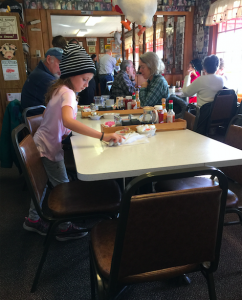 For the next two years, she saved every dollar she got – for Christmas and birthday gifts, for good report cards, from her brief stint “waiting tables” at my aunt’s restaurant, that she happened to find walking down the street or in the dryer at the laundromat. Given the option to get X item “as long as she used her own money,” she chose to save her cash every time. Until she had stored up the $550 she need to buy an iPhone. At which point, my husband and I, still firm believers that she had zero need for an iPhone, said, “Well, that’s enough to cover a phone, but service costs $100 a month.”

Now, Eva was admittedly exasperated. Whatever, the second grader version of “What the hell?!” I’m sure she said it. In a brief pity spree, she probably dropped $50 on random things she didn’t need. “OK,” she said one day, “how much do I need for a computer?”

“You could probably get a Chromebook for like $200,” I said. (Her school uses Chromebooks.)

“Ugh,” she said, offended. “No way. I want a computer like yours.” (We’re an Apple family through and through.)

“I want to use it to code,” she said. And I couldn’t really argue with that. 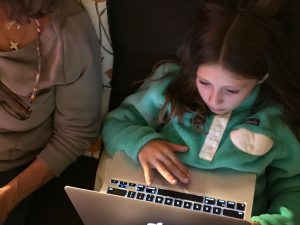 So she went back to saving, deferring getting all the little stupid things she wanted (like fewer Shopkins, yes!). Despite having been shown how we should not underestimate her, we were caught slightly off guard when after her recent birthday, she announced – that after almost four years of saving – she had enough cash to cover the purchase price costs. This time, I did not spring on her the fact that it would be another $250 between tax and AppleCare (I’m not a complete jerk). On Monday, I ordered her computer. She handed over the contents of her pickle jar, her literal life savings, which is why I had a wad of cash to take to put in the bank.

As a mom, obviously, I think my kid is amazing. As an entrepreneur, I can’t help but be impressed by her as well. She displayed patience. She worked for what she wanted, even when it seemed like a nearly impossible task — seriously, she’s 9 and doesn’t have a consistent income. She put off getting what she wanted now for what she wanted most, to borrow a line from my own mother. She didn’t care that we were skeptical of her ability to do it – not because we doubted her, but I refer to my previous point about being 9 and not having a job. And in the face of all that, she succeeded.

I think about that now because running a startup in many ways is like that, especially if you’re a non-traditional and/or first-time founder. You have to work hard, even when you don’t know when your next real payday will come. You have to ignore people who will politely (and genuinely) say they support your company, but who are skeptical of it ever becoming anything. You have to be patient because you will find that it always takes longer than you think it will. And you have to believe that you will be successful, even when it seems like achieve that will take “forever.” Because if you do all that, one day, you’ll wake up and find your proverbial pickle jar will be full of wads of cash and you’ll have actually done it. [And trust me, I fully get she is privileged to have a life where this is even a possibility – because I recognize there are a lot of people from whom being able to save up $1,000 is as seemingly impossible as saving up $100,00 or $1 million. That is a whole other post.]

I’m firmly convinced that we’re on that track when it comes to 7 Generation Games – especially now that we’ve got one more junior developer to add to the mix. (Plus, I refuse to be shown up by a 9-year-old!)

One thought on “A Wad of Cash and the Keys to Startup Success, Or Things My 9-Year-Old Gave Me”