Here is a phrase you will never hear: “I wish I knew less languages.”

Mastering another language is a key that unlocks other parts of the world that, otherwise, you wouldn’t be able to access. Another language unlocks new conversations about literature, music and more. It isn’t necessary to be as great as Ziad Fazah, who knows about 58 languages, but if you know at least 2 then that’s already quite good. Here are some of the benefits of learning another language:

Virginia P. Collier and her husband, Wayne Thomas, are professors at George Mason University who have been studying the impact of bilingual education for decades. Their studies, covering 6 states and 37 districts, have consistently shown that students who have this type of education outperform their peers who know one language. The former have higher grades, greater class attendance, lower behavioral problems, greater parental involvement, and seem happier. They believe that bilingual education is the key to ending the achievement gap.

When a child speaks more than one language, he or she will be constantly thinking in those languages. Many researchers agree that this causes the child to develop advanced executive control or achieve higher cognitive processes. This means that they have more tools to memorize, think, and solve problems. He or she also has a more flexible and agile mind. All of this is known as the “bilingual advantage.”

This may sound obvious, but we can’t ignore it. Being bilingual helps you communicate and meet more people. This becomes a professional tool that is simply priceless. For example, let’s say that the company you work for decides to work with a company from Spain. If you are one of the few company employees who speak Spanish, the probability that you are involved in the project and and are seen as a valuable bilingual employee within the company increases. It makes you a more competitive and attractive employee for the global market.

A neurological study shows that no matter the age at which you start studying a second language, this delays cognitive aging. In 2013, the University of Kentucky School of Medicine conducted a study in which older people performed memory tests that consisted of activities such as classifying colors and shapes. During the study it was discovered that bilingual adults performed better than monolinguals. In addition, monolinguals had more difficulty completing the tasks.

5. It makes you smarter

At the beginning of the 20th century, it was believed that speaking several languages ​​was not beneficial. It was considered a “cognitive interference” due to the constant alternation of the brain between the two languages. However, it has now been shown that managing 2 languages ​​makes you smarter (like our games!). Even when you are only using one of them, the brain uses both. This, in turn, serves as a training for the brain. The constant activity that occurs in the bilingual brain actually makes it more efficient.

If you want to try the bilingual experience with your children or students, we invite you to check our bilingual games.

Description: “AzTech: The Story Begins” teaches math as well as incorporates social studies and language arts – because real life isn’t broken down by subject. Making it twice as nice, it can be played in English or as a bilingual English/Spanish experience. AzTech Games is the FIRST fully bilingual, cross-curricular math adventure game series on the market. Language of instruction is controlled by the player on every single page within the game, including text, audio and video content. 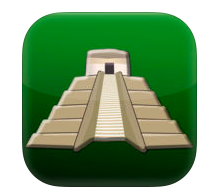 Description: In the heart of the Mayan jungle. In this fully bilingual game, players learn and apply skills from how to read timelines to understanding distributions to reading pictographs (and more!).

Description: Whether you are teaching English language learners or want a fun app to expand your Spanish vocabulary, Making Camp Bilingual fills the bill. Packed with videos and activities, players practice multiplication and division skills while learning math problem-solving strategies. They’ll also be introduced to Native American history as they learn about the Ojibwe. Earn points by solving math problems and answering social studies questions in the village-building simulation game. 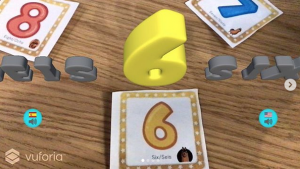 Description: Our first app for pre-school age and up teaches counting in English and Spanish. Kids will love seeing virtual numbers pop up in their real world in this new app from 7 Generation Games and Strong Mind Studios. Bring numbers to life in two languages in this interactive augmented reality app! 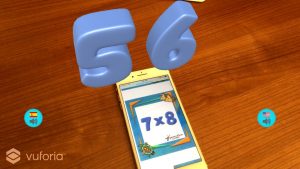 Description: In Math: The Universal Language AR, you learn numbers and math terms plus practice multiplication facts in English and Spanish in our awesome AR game.