When I was 7 years old, my forte was Yui-Gi-Oh. Does that not sound familiar? It’s a fictional Japanese gaming cartoon that has existed since the 1990s and I was obsessed how a card can turn into a creature. This show stole my early Saturday mornings and I began collecting cards and updating my collection. My extended family would create tournaments, brackets, and created our very own disk readers out of frisbees.

If you would have told seven-year-old me that one day we would have the technology to virtually create Yui-Gi-Oh using Virtual Reality, I would have asked you to explain those unfamiliar words – after all, I was only 7. After you explained it to me I would have jumped so many times and asked for it “NOW! NOW! NOW!”

I would have asked,

“Why? Why do I have to wait? Are you sure we’ll have this some day, because it sounds too good to be true! “

Now, fast forward 12.75 years later, I still would respond with,

After going to E3, crazy is only the beginning. I tried games with different accessories that I had no idea were in the making.
I tried this long sleeve shirt product that had sensors and when you moved your arms in a running position, you were running. When I jumped, my character jumped, ducked, squatted, and so on. It gave me so many ideas that could happen in our games in the future. Imagine shooting buffalo making the b 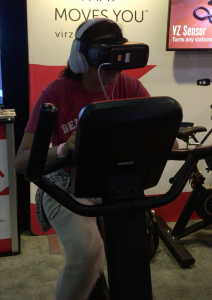 ow and arrow gesture in our games? That would be so cool!
I was able to bike a stationary bicycle while shooting tanks that were trying to shoot at me. This was such a cool product because all though in the game I was riding a bike, they explained and show they could change it to be a canoe, tank, car, and the list goes on!
Imagine biking through Fish Lake and swaying your head to dodge the rocks instead of using the arrow keys? Wouldn’t that be awesome? Although, we don’t have that technology in our games RIGHT NOW, we are working on it and we do right now have great fun games that let you shoot buffalo! Check them out! 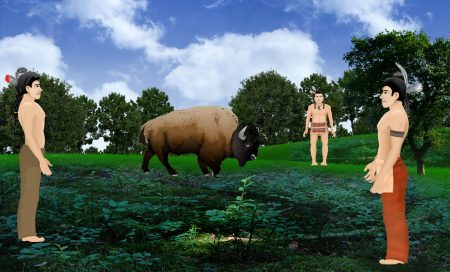