Skip to content
Home » Blogs » AnnMaria » Eating my own dog food: Learning Spanish from a game

Life is sweet. After months of revisions, translations and testing, Aztech: Meet the Maya will be submitted to the app store by the time I get done drinking this martini. Champagne would be more appropriate but it was after midnight when we made the last mandatory change and all the liquor stores were closed, so we have to make do.

(While we’re waiting, you can get Aztech: The Story Begins here, free, for your iPad.) 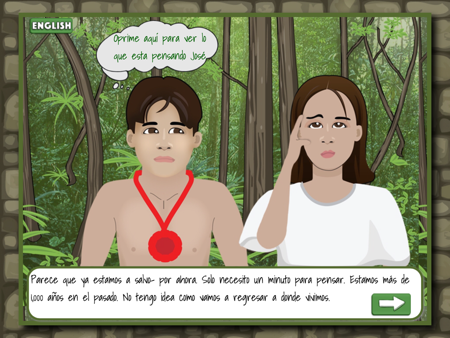 When we first proposed creating a series of bilingual educational games, I said players would learn social studies, math and a second language all at once. Little did I know that I was about to become a subject in this study.

We created the games to help middle school students learning English (and their teachers), by having math and social studies games where students could control the language of instruction. However, we found students learning Spanish played Aztech: The Story Begins to learn Spanish.

I’m heading to Santiago in about a month, as part of Startup Chile. I’m super excited but also concerned that my Spanish is not as fluent as I would like. So, I volunteered to be a game tester and I have been playing the game in Spanish.

Since many American kids who grow up in homes where Spanish is the language spoken never had any formal instruction in reading and writing Spanish, we had the text in Aztech Games read in voiceovers, had the sound track in videos in both languages. This has been really helpful for me because there is just no substitute for hearing the language. After all, I’m not going to be just reading newspapers and technical documents in Chile, I’m going to have to find my way around the city, buy groceries, go to the bank and generally have to listen to people and understand them.

Can I honestly say that Aztech is improving my Spanish?

Yes. Yes, I can. My vocabulary is improving. My grammar is getting better. I understand more what people are saying. If your knowledge of Spanish is zero, I can’t claim that Aztech is the best way to learn. BUT if you are one of the millions of people who know “some” Spanish – whether you had a couple of years in school , got lectured in Spanish by your grandparents or learned enough to talk to that neighbor you had six years ago – I think you’ll be pleasantly surprised at how quickly it comes back to you.

What else can you learn from a game?

In my case, I knew all of the statistics taught in the game – I wrote that section, after all. However, we had other people writing the social studies content. I knew relatively little about Latin American history and geography – like most people in the U.S., if we’re being honest. I can’t claim to be an expert now, but I certainly do know more than I did. 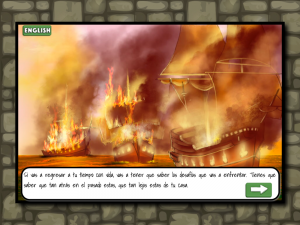 Funny how things work out. Who would have guessed a couple of years ago that when the second game in the series was produced, I’d be one of the people needing it to improve my proficiency in a second language?

Which just goes to show, you should make your dog food tasty because you just might end up eating it some day.

(Maria hates that phrase about dog food. I expect when I’m out the country she’ll delete this whole category from the blog.)