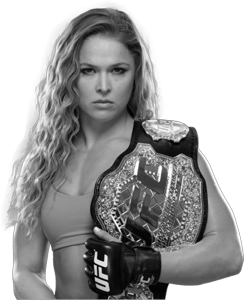 I love Ronda Rousey as much as the next person does. In fact, I love her probably a thousand times more than the next person does because I am her mom. I couldn’t be happier that she has won three world titles in two different sports. That’s wonderful.

That being said, every time someone asks me why I am making educational games instead of coaching in judo or mixed martial 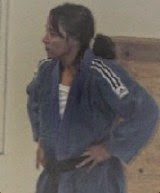 arts, I just want to grab and shake them.

Little known fact: In 1984, I was the first American to win the world judo championships.

In 1985, I entered a Ph.D. program at the University of California, Riverside and by 1990 I had an M.A. and a Ph.D. My specialization for my doctorate was applied statistics and tests and measurement. While working on my doctorate, I taught children who were severely emotionally disturbed. This is where I began thinking about computer games to teach math.

Many of my students were behind academically, due to all of the days they had skipped school, been in court, in jail or other less than desirable situations. By eighth grade, they were often two or more years behind where they should be. If they kept on the path they were, their ending was pretty obvious – they’d be dead or in jail by the time they were in their twenties.

I don’t know why some people can’t seem to understand this. If we can help that kid move from being barely able to read, write or add to a point where he or she can actually keep up with the class and graduate, a whole world of opportunity opens up. Maybe that person can get a job, pay rent and live on their own, provide for a family.

What if we DON’T make a difference? What are the options for an adult who dropped out of school, can’t read well, can barely do math beyond addition and subtraction? Maybe one in a million will be a gifted athlete, musician or artist. Even those people don’t often get by, though, because they are the prey of unscrupulous lawyers, managers, “friends” – they often end up with nothing. As for the other 999,999 in a million, they have nothing all along. They end up dealing drugs, panhandling, selling themselves on the streets in one way or another, on welfare.

Ronda is a pretty smart cookie and she understands all of that, which is one reason she is so involved in supporting charities.

I wish more people understood the importance of making a difference in children’s lives. It seems so obvious to me.

I’ll bet you are proud of your daughter.

I am very proud of ALL of my daughters.

The other Rousey sister also understands the importance of making a difference in children’s lives. She teaches at a middle school in downtown Los Angeles. 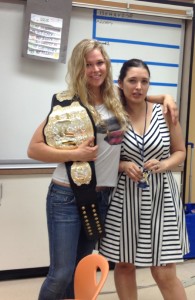 Why people fawn all over one of them and not the other never ceases to amaze me.

Ronda does a huge amount to help people through her charity work and that makes her the exception for a world champion.

Jennifer does a huge amount to help people every day through her work and that makes her the rule for a teacher.

That’s why I choose to work toward making better education instead of better martial artists.

Buy our games. Learn multiplication, division and fractions. Try not to die.

One thought on “Education is More Important than World Titles”