Since we successfully completed our Kickstarter campaign  we haven’t had too much to say about Forgotten Trail.

Yes, everyone received their awards in the mail; t-shirts, posters and postcards. ( If you did not, email info@7generationgames.com )

What’s actually happening on the game? 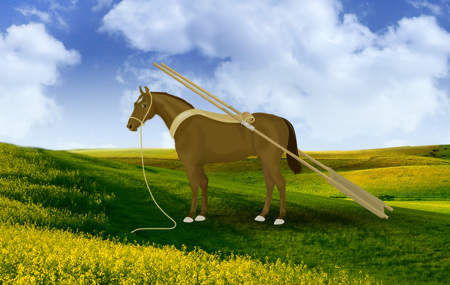 One of those who bought a game character sent photos of her grandson, Phoenix, that our talented artist, Justin Flores, is turning into a non-playable character that our heroes, Sam and Angie, will meet in Detroit. I’m not going to tell you what role Phoenix plays in helping them out. No spoilers!

A second backer, author Derek Landry, is having a contest to determine which of his readers will win being a character in Forgotten Trail. If you are not one of his readers, you are missing out. Check out the Skullduggery Pleasant series. His books are supposed to be for young people, but I confess that I find them a great way to pass the time on an airplane or any other time when I want to take a break from reality (which is not often enough).

The other three backers have not gotten back to us yet with photos for their character (maybe they have forgotten?)

Except for those characters, we have the artwork for Forgotten Trail completed. For the myth sequence, where their great-aunt tells them a story that turns into a game level, we were aided by the ultra-talented artist Stephan Gladue.

You can see an example of his work below: 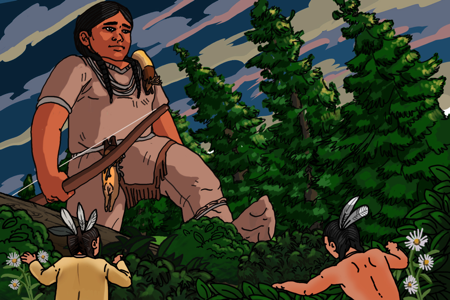 Our audio engineer is completing the music and sound effects even as we speak, type, whatever.

The game design and story line is pretty much done.

The parts that need work are the educational content, the game play part and, of course, testing the game.

We are not a bunch of slackers …

When the Kickstarter ended, we were already working on polishing off two games, Spirit Lake and Fish Lake.

Then, great news!!! we were informed that we had been selected as a Phase 1 grant from the US Department of Agriculture for our new project.

During all of this, we have been discussing design for a very innovative game to be developed in collaboration with the Circle of Life program on the Fort Berthold reservation.

If you add all this up it comes to five games, and we’re a small company! So, we divided and conquered.

As soon as a person’s job on Spirit Lake was done, he or she moved to Fish Lake. When done on Fish Lake, that person moved to Forgotten Trail.

By next week we will have a full team working full-time on finishing up Forgotten Trail.

We also had four backers at the two highest levels, which enables them to be part of our game design meetings. One of those backers was up in the mountains for a week, training for a world title fight. Then, I was out of town. We will be contacting those backers next week to coordinate schedules so that we can all meet either via Skype, Google hangout or in our offices.

So … that’s the news on Forgotten Trail.