DO YOU HAVE GAMES FOR iPAD?

The following games by 7 Generation Games are iPad compatible and accessible.

If you’re the one-stop shop kind of person, you can just go to our AppStore page here and see all 12 games. *

Click here to get our games in the App Store – for iPad.

Or if you’re interested in learning more about each game you can read more below.

* If you are only seeing 9 games, you’re probably looking at it on a computer and it only shows games available for both iPhone and iPad. Try again on your iPad and you will see all the games. Take it up with Apple.

In fact, the first three are on us!

Learn math and social studies as you building out your own virtual wigwam! Available now and can be played across all platforms. Aligned to Grade 3 standards. (Also available bilingual below.)

Making Camp is also available as a native iOS (iPad only) and Android (phone and tablet) app for free. Just click the respective icon below from your compatible device – or search “Making Camp” in the App Store or Google Play Store.

Canoe through the rapids in this free demo level from Fish Lake Adventure. Find out if there is enough food. Solve fractions problems. Recommended for grades 4 and up.

Our most-popular game expanded! Get three times the content of “Making Camp Ojibwe” in this fun and interactive app. In “Making Camp Premium,” players practice multiplication and division skills while learning math problem-solving strategies. They’ll also be introduced to Native American history. PLUS get the completely new words challenges section, an activity randomizer and more. $1.99 (There is also a Making Camp Premium Edu for schools.)

Learn math and social studies as you building out your own virtual wigwam – in English and Spanish! Aligned to Grade 3 standards.

AzTech Games is a fully bilingual multi-part adventure games series aligned to Grade 5 and 6 math standards. What was just an ordinary day in history class becomes an adventure, as Xitlali and Jose find themselves transported back more than 1,000 years in time. Drawing from math, history and language arts, they need to find a way to make it home.

Check out the first chapter of the AzTech Games series, where players apply real-world applications of math (including fractions, averages and multi-step problem solving) as they embark on what soon becomes an unbelievable journey. How does one find themselves whisked from Iowa in 2015 to somewhere in the Pre-Colombian jungles of the Yucatan? Play AzTech: The Story Begins to find out. It’s available for iPad as a free download.

Game 2 picks up where AzTech: The Story Begins leaves off  – in the heart of the Mayan jungle. In this fully bilingual game, players learn and apply skills from how to read timelines to understanding distributions to reading pictographs (and more!).

Available in the App Store for iPads for $1.99.

We’ve been asked for years to develop a game for younger students. We listened. Counting by Two Languages is our first app for pre-school age and up teaches counting in English and Spanish. Kids will love seeing virtual numbers pop up in their real world in this new app from 7 Generation Games and Strong Mind Studios. Bring numbers to life in two languages in this interactive augmented reality app! 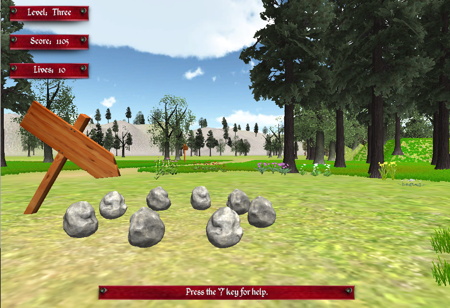 And we have more coming soon with iPad releases for Spirit Lake, Math: The Universal Language Dakota and Making Camp Dakota slated for this summer!