My kids got out of school last Friday, but really their summer break starts tomorrow. Well, technically, it will be winter break. That’s because – in just over 24 hours – me, the three of them (ages 3, 6 and 10) and a large amount of snacks will be boarding a 12.5-hour flight to Santiago, Chile. And for the next six weeks, Santiago will be our home base. 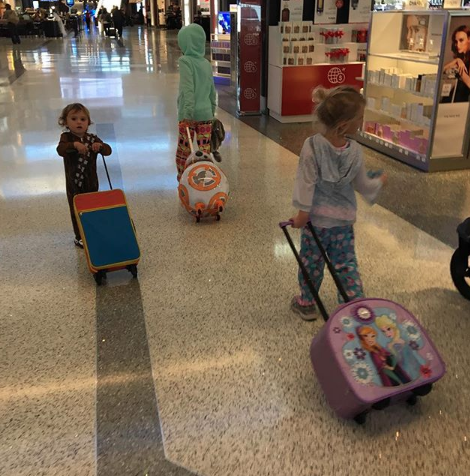 Fortunately, my kids are seasoned (and very good) travelers

It’s going to be part-adventure and part-learning experience – kind of like the games we make at 7 Generation Games (sorry, I just so unintentionally set myself up there that I had to take advantage of it).

Now a large part of our going there centers around the fact that 7 Generation Games just opened up our South American office in the country as part of our participation in Start-Up Chile and the launch of Strong Mind Studios. And while I am super excited about that and what it means professionally, I am also super excited about the fact that it provides me an opportunity to take my kids to another continent and immerse them in a completely different culture. Not to mention another language.

“You know you’re going to have a learn another language to talk about me in behind my back,” my 10-year-old told me. I pointed out, I don’t speak about her behind her back in Spanish, but do it right in front of her face. (Although, I am well aware that she understands far more Spanish than she speaks.) Improving my kids’ Spanish is a major reason for the trip. I have seen firsthand how much having second-language proficiency opens doors. Just this week, we were looking to hire a video editor and being bilingual gave one candidate a major edge.

Having lived abroad twice, there’s something to be said for experiencing life from a completely different part of the world. Seeing how very different some things are in other places, and how absolutely the same some things are almost everywhere. I’m excited about being able to, in part, see the experience through my kids’ perspectives. We’re going to get on a plane where it’s summer in Santa Monica where we can see the beach and get off in Santiago where it’s winter and we can see the Andes.

And given the current state of affairs, I hope they come away from the next month and a half, not just as better Spanish speakers, but better people. I think the more experience we have around the world – as outsiders, as people who don’t speak the local language perfectly – the more empathy we can develop for people facing those realities every day. (I’m going to leave it at that because I’ve got to pack for four people tonight, and if I really start going down this road right now, I will probably be typing until Friday.)

With that in mind, I’m off to make sure that my 6-year-old’s suitcase actually has clothes in it and not just stuffed animals (as we discovered to be the case once when we arrived at our hotel for an extended weekend getaway).