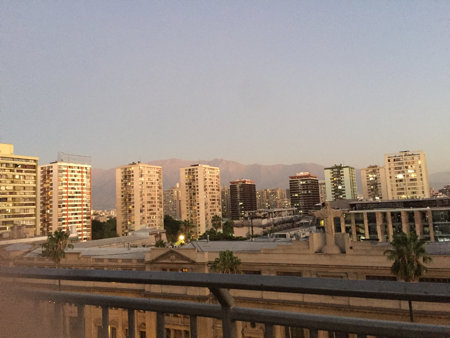 You might be asking yourself am I actually doing any start-up activities in Santiago. Instead of asking yourself, you should be asking me. It’s not all watching the sunset over the mountains from the rooftop pool or coding while drinking Pisco Sour.  Oh, no, those rumors of my slacktitude have been spread by my enemies, of which I have none.

So, how’s it going in Santiago? Well, I’m writing this post using voice recognition software so I guess we both know what happens when I finally get some time to work without interruption. I type until my hands are in danger of being seriously damaged and then I use my voice to type. Still, there is the Pisco Sour, so that’s good. 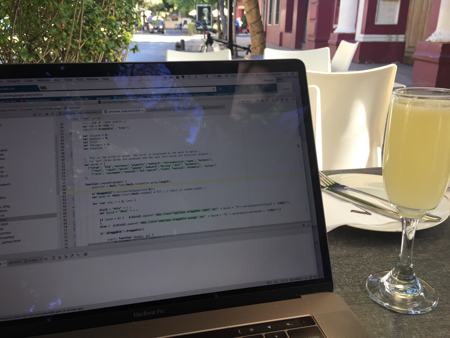 Actually, the startup Chile activities have been productive, smooth and amazing.

The productive part – we did several activities that were focused on both getting to know members of the cohort better and practicing pitching our startups. For example, each startup is assigned to an account executive who has 10 to 13 companies. Within our group, we paired up with another company and we each gave our 30 – second pitch to one another. Then, we switched partners and did it again until we had each given our pitch a dozen times. I thought this was way smarter than the way it’s usually done where each person gets up and pitches the whole group because you were able to do your pitch 12 times as often as if we did whole group pitches, and you still got to hear all of the other pitches. There will also be plenty of opportunities to pitch to groups later on, according to the schedule we received.

In another activity, we pulled company names out of a bag and had to pitch that company, not ours. Some of these were pretty funny, because we had just heard pitches from a dozen companies and it was hard to keep them straight. My favorite was when Daniel ended his pitch with,

“And this thing they are making will be the BEST PRODUCT EVER!”

The smooth part – they call the first two weeks a “soft landing”. What that means is the Startup Chile staff do everything humanly possible to make it easy for you to live and work in Chile. They have you come to their offices and a staff member helps you Xerox all the documents that you need. Then, as a group, you all go to PDI, their equivalent of ICE , where staff members accompany you to the appointments they made for you and are available in case you need an interpreter. Then, the civil registry, kind of like the DMV, comes to the office, sets up and has people come in to get pictures taken and fill out forms for an official ID. What would take you 6 – 24 MONTHS in the U.S. gets done in 10 days.

I mentioned how amazing the people are in my last post. My point is, these are people who have been selected from literally around the world to be part of Start up Chile. In many incubator and accelerator programs that I have seen , despite whatever they may say about community, the general attitude seems to be, “my company is great and the rest of you are a bunch of losers”. On the other hand, you have people who consider it a zero-sum game, “You’re my competition. If you get your start-up funded, I won’t so I’ll smile a lot but I am not going to help you out and secretly hope you fail.”

Here, it is the opposite of that. For example, there are 8 educational technology companies and we got together twice to practice our pitches for the first day of presentations (it was on Tuesday), since we have some idea of the market we are all targeting. It’s only the second week and we have started planning an Ed Tech Demo Day. We’re going to have a dress rehearsal in April with other companies in Startup Chile and students as the audience and in May we’ll be inviting investors and industry experts to a “demo day” where we’ll demonstrate our products and then each give a pitch.

Yeah, and this is what we have done after 10 days here!

If you are an accredited investor or educator and have had a massive urge to visit Chile on business and see some awesome education start-ups, hey, hit me up, post your contact information in the comments or email info@7generationgames.com . It’s going to be an invite only event and each company gets to invite 5 people.

If you can’t make it to Chile, you can still check out AzTech Games. Play Meet the Maya on your iPad. Learn statistics, history and escape from Honduran fruit bats.

Seriously, dudes, don’t just read these blogs, show some love and buy our games. Play in English or Spanish. Or switch back and forth, we won’t judge you. Well, Maria, might, she’s kind of judgmental, but just don’t tell her.