As I write this I’m starting to feel as if I’m ready for another accelerator, but that’s a post for a different day. In my last post, I mentioned what we gained from being in an accelerator. Today’s is about what you actually DO in an accelerator program.

I’m assuming that most people join an accelerator program because they want money, both the money the accelerator invests directly and money you can potentially get from their investors. In return, you agree to spend 12 weeks or more as part of their program. What exactly is that program?

Also, we released AzTech: The Story Begins in the middle of the program.

We’ve been in two accelerators, both of which required a large amount of pitch training. I’ve wondered a lot about whether this was really worth it and have come to the conclusion that it is but maybe not for the reason their staff thinks.

The ostensible purpose of pitch training is that you refine a 3- or 5-minute pitch about your startup, with an accompanying professionally-designed slide deck. On demo day, you present this to investors with the hope that they will be wowed enough to throw bags of money at you.

This isn’t really the way it works. If you are lucky, some of the people who hear your presentation might follow up with you afterwards and several emails, meetings and a convertible note later you might get a check. In both accelerators in which we participated, most people received zero dollars in investment. We were in the minority who DID receive funds, both times.

What all that pitching, answering questions, refining the pitch, tweaking the PowerPoint DID did was cause us to have solid answers about our business. What exactly was our Total Addressable Market? Total Obtainable Market?

Puh-lease don’t make me laugh by talking about the global market for X.

As I said in that blog post, if you have trouble getting sales in your home country where you have family, friends, connections (and who doesn’t?) , how much harder do you think it will be in some other country where you don’t even speak the language.

So – Boom Startup helped us identify a realistic target market and focus our marketing, check. 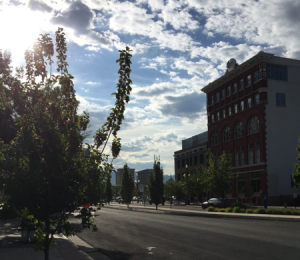 An accelerator helped us move from a product to a business

If you apply to an accelerator, they’ll probably tell you that you’re going to get $100,000 or more in “perks”. While I’d question the numbers from some programs, we really did get a lot of perks from the accelerators. One thing Boom Startup gave us was access to a lot of market data that we wouldn’t have had the money to buy.

They provided an attorney that helped us complete all the paperwork to become a Delaware C corp which was the structure that investors preferred.

There were classes and one on one sessions with a CFO that helped us put together our cap table. Since I’d had a couple of finance classes over 30 years ago, that was super helpful.

There were a couple of sessions on managing a business with a serial entrepreneur – Rob Gallup – we called him 1-b Rob to distinguish him from 2-b Robb Kunz who was one of the founders of the ed tech fund. A point 1-b Rob made that stuck with me is that “you never know” , you may be doing well financially today but the market can change, so watch your expenses carefully.

David Fernandez, from the other accelerator I’ll get to another day, Startup Chile, put it eloquently,

Cash Flow is More Important than Your Mother

To this day, I regularly review our expenses. We moved our offices from Santa Monica to Long Beach to save on rent. If the work we hired someone to do is finished, say, translating all of our material into Spanish, we lay them off. Yes, if there is other work they can do we keep them, but it has to be work that NEEDS doing. As your company grows, you may find that you need different people. That’s a tough pill to swallow but you can’t afford to waste money on work that would be nice to get done while bigger priorities go unmet.

I teach statistics in my spare time that I do not have. There’s a cartoon I like that show two scientists at a black board pointing at a flow chart. It goes down in order – Hypothesis, sample, data collection , then there is a box that says

THEN A MIRACLE OCCURS

Too many startups operate this way. They are going to make X product, raise a bunch of money, a miracle will occur and they will have 3 million users, $100 million in sales and sell the company for half a billion dollars.

The question is, “How are you going to get from point A to point B?” With constant prodding from Boom Startup’s Jessica Bleak, we identified a set of metrics – paid users, unpaid users and sales. We track those every month. We also look at web site and social media statistics (even though David and Jessica both call those vanity statistics I want to see if anything we do increases these and their correlation, if any, with sales and users). I look at impressions versus downloads on the App Store. I could go on and on. My point is, we focused on tracking our progress not just hoping we’d get there.

In the end, I wouldn’t say it was the pitch training itself that led to funding but all that went into having that pitch ready. We knew what a reasonable assessment of our market would be, who we were targeting and a better idea of where to reach them. When we met with investors and they asked questions about our convertible note or valuation, we had answers.

I want to give you a caveat, here.

There are two kinds of companies in accelerators, those who have a product and those who don’t.

In my experience, companies that come into an accelerator who already have a product and paying customers have it MUCH harder than those who have just an idea. On the other hand, those companies are also more likely to be successful.

While we were doing all of these classes, pitch training, etc. , we were also supporting the customers for our existing games – we had 4 at the time, now we have 14. We were also creating a new game, AzTech: The Story Begins, with all of the testing and debugging that goes with that.

So, we left Salt Lake City a lot wiser with a little more cash and moved on to the next phase of our startup, which I call “pushing water uphill”.