Picture this: a young married couple from Mexico moved to the U.S. in their late teens to start a family. It should be assumed that their future children would be bilingual, correct? It’s simple math, two bilingual parents (who are native Spanish speakers) have kids. They teach their kids Spanish first, then they can learn English in school. So simple that we should make that a math problem in our games (joking). 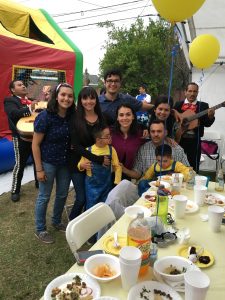 This is my family 2 years ago…hence the longer hair

There are six kids in our family. Given the above, that should mean six bilingual children. Well, my older siblings who are at least fifteen years older than me are bilingual. Then there’s an age gap of at least a decade between them and when my older brother was born, exactly four years before me. (Sarcastic “yay!” for joint birthday parties.) He can somewhat understand Spanish but prefers to not speak it. Here I am, fourth of the six, where I mostly understand Spanish and consider myself at intermediate level. However, speaking Spanish is muy difícil.

So why did I begin with what’s a martillo you may ask?

“Martillo” coincides with a job I was applying for last summer. I was looking for another part-time job to help with financial needs. I applied to Home Depot and read that bilingual people were paid more. Amazing, I thought, I say I can speak Spanish and I can get paid a little more. I mean I figured, how hard could it be?  I understand Spanish… and while speaking is another story, I certainly can get by.”

During the application process, the questions read like this, ” A martillo is a ____________ ” .  It was multiple choice, but I read martillo and thought it was a name, leading to significant confusion as to why Home Depot was asking me to define a name. Luckily, I had time to Google the answers, but I  quickly discovered that A) Spanish is not my strong suit and B) a martillo is a hammer.

You may be shocked to learn that I didn’t get the job. And I am glad I didn’t because I would have been a wreck trying to help someone find a martillo when they really wanted paint.

But there is good news! I did get hired as an intern at 7 Generation Games where they make math games (like these!) that also teach Spanish! Two of my favorite things: math and a part of my culture: Spanish! So if there is anything good that came out of last summer are 3 things: I accepted that I am not FULLY bilingual BUT I AM WORKING ON IT; second is that these math games are awesome and you should get them for any child you are thinking of right now; and third, 7 Generation Games is a great company, and I am so happy to be back on the team for the second summer in a row.

Let’s see how well my Spanish improves playing these games.

Want to hear my journey of trying to become bilingual? Let us know in the comments!