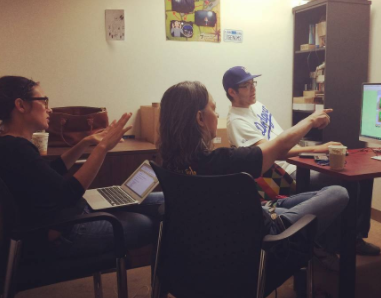 Here’s one of the things that separate successful startups from people who have good ideas: Execution. In other words, it’s easy to be a “big picture” visionary, it’s doing the million little details that is the hard part.

We met on our AzTech Games series earlier this week. Going over the design document, we were fleshing out the later levels and going through other games to see what code we had that we might be able to adjust and integrate.

It was fun and exciting and ideas were flying. “We’ll do this!” “And then add this here!” “Oh, and it would be really cool if we did this!” “And what about if we added this!”

Game design brainstorming sessions are, to me, one of the most fun parts. It’s when you get to begin creating something out of nothing. But here’s the thing that you don’t see nearly enough in all those entrepreneur articles, blog posts, “empowering talks.” Lots of people have ideas, even good ones. What makes a difference is actually bringing that idea to life which involves a lot of hard work and lots of little details.

In our case, it involves going over a game that you’ve already played a dozen (or maybe 100 times) to see if the newest version of changes work. It means going through a game and getting the answers right, then wrong, then a combination of right and wrong to make sure all various scenarios of the game work.

It means managing teams of people who are working to make the various videos, audio, artwork, programming (2D and 3D elements). It means things like creating a 30-page game review documents that have hundreds of tiny tweaks that you have to send to your staff to make on their various elements and having them mumble about it behind your back (yeah, I hear everything you guys!), but then later admit that you and your “nitpicking” did make the game noticeably better (I knew you’d all come around!).

It means things like spending the better part of two days trying to solve a programming problem that is essential to progressing in development. It’s everything from picking fonts to figuring out where the narrative drops on and how to bridge it altogether. It’s logistics like balancing game quality and file size.

It’s things like going to the far corners of the earth (OK, rural North Dakota and tropical Belize) and testing our games on various networks. It means meeting with teachers and students to get feedback. It means smiling and sounding appreciative when people are being hypercritical of your games. It means spending two hours in traffic or pastoral countryside each way to have a half-hour meeting (meetings that are totally worth it, by that way). It means spending lots of time on lots of airplanes and sending lots of emails. And adjusting your calendar because it never is done as quickly as you think it will be.

It’s great to be big picture, but it’s the doing all the little things that really lead to your vision getting done.

Want to see some of the other big picture visions that we’ve brought to life through all the small details? Check out our other games as we work on building out AzTech!