Skip to content
Home » Blogs » AnnMaria » Learning from everyone: software and disabilities

Brief update on my personal life – after returning from my trip to North Dakota and Wyoming, I had surgery to reconstruct my thumb. You can see what my splint looks like below. I got the black one to look like Darth Vader because my granddaughter thinks he’s cool. I believe this makes me cool by association.

This is my second day of using Dragon software for voice input instead of typing, and I would say there is good news and bad news to report. I’ve also, perhaps surprisingly, learned a lot that can be applied to our games.

The good news, it works quite well with Google docs, word press for blogs and with twitter. It also works okay with the comments on WordPress. 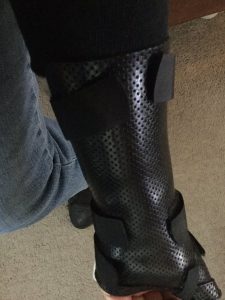 The bad news, if there is any good documentation on how to use Dragon with Gmail I have not found it. I have only come to the depressing conclusion that all people who make YouTube videos on Dragon either are

I found many many videos on how to use Dragon to compose an email but apparently no one ever deletes email or replies to an email. So while an eight minute video might show me four times how to go on to a new line -newsflash you do it by saying those words – none of those videos ever explained how to send an email without having to click or how to reply or how to delete an email.

Now maybe I’m expecting more out of the software then it was designed to do because what I would like is to be able to use my computer without touching it. That may seem an odd requirement particularly since I have one hand that works just fine for now. However, something I have been interested in for a long time is making software for people with disabilities. Truly responsive design would consider the possibility that a person might have a physical or visual impairment that precludes him or her from using the keyboard.

That’s not the assumption these instructional videos make by the way. They assume that you will be using Dragon as a supplement to your keyboard and mouse.

It’s funny that darling daughter number three,Ronda, who bought me the software for a birthday present commented about my surgery that she had never had an injury that did not make her a stronger better person in the end. I know that’s true from the days when I did judo, I injured my knee and could not perform many of the standing techniques so I became the best in the world at ground techniques.

We are currently working on software with the three affiliated tribes on the Fort Berthold reservation that will use voice input, so it is good that I am getting experience with it. I think that particular application may be used by people with a definite preference for voice input over typing.

Also, here is my key to being less frustrated when using the Internet or in life in general – I try to use my annoyance as a signal of what not to do when developing our own software. For example, when we complete the new game(it’s called crossroads by the way, and won’t be available to the public for a while), I will be very sure that we have documented every feature rather than documenting some features 11 times and other features not at all.

As I get older, I have no doubt that my arthritis will get much worse and there are millions of people in America like me. We often think of people with disabilities as those small children in wheelchairs we see when ever some fund drive is happening on TV. However I believe it’s much more accurate to think of grandma and grandpa who as they age have strokes, develop arthritis and in many other ways acquire disabilities as they age.

You might wonder what this has to do with 7 Generation Games. At one time we wondered the same thing. We noticed that some of the people who play our games are far older than the target age group. In fact, they were retirement age or older. We were not the first to discover “a group sometimes referred to as” silver gamers”.

These individuals who use our games tell us that they believe the brain is like a muscle and if you don’t use it you lose it as far as mental capacity. They found the games to be a fun way to challenge themselves mentally. While it is true that they were not finding derivatives, that was not the point. Their goal was not to work towards an engineering degree but rather to keep themselves mentally fit. Playing our games was the mental equivalent taking a daily brisk walk around the park.

I’m going to be in North Dakota next week installing our games in more schools. As school start up around the country I am polishing Spirit Lake and Fish Lake fixing a lot of little bugs here and there.

However, it’s been said that you can’t un-have a thought. I have certainly had a lot of thoughts about disability aging and gaming lately. These ideas are certainly not going to go away. We are piled up with work right now but making games that are accessible to everyone has been on my radar for a while and that blip keeps getting bigger and bigger.

*Yes I wrote this whole post using Dragon with voice input instead of the keyboard.

One thought on “Learning from everyone: software and disabilities”