I spent a few hours yesterday making a new product video for 7 Generation Games. It was an updated one that include footage from our iPad app. And before that I had been working on an umpteenth version of our deck because every time I need a deck – whether it’s for a presentation or a pitch or to send along to someone – it seems that it needs to be a completely different version. 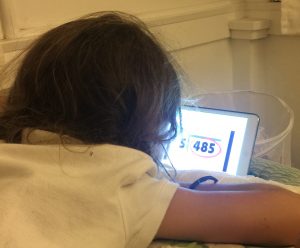 My kid loves “Making Camp.” Your kids will too!

And then as my daughter was playing Making Camp (get our free iPad app here!), I heard the familiar sound of my voice as many of the movies played, because well, I made those too. That’s the way we do things at 7 Generation Games – ourselves.

I bring that up because we have been around long enough now that I have seen a number of companies rise and fall over the last three years. And yes, there’s no startup that’s a “sure thing” (because I’ve seen a number of “sure things” become “nothings”), but there are things that I’ve seen other startups do – even more specifically other startups and industry experts look down on us for not doing – that now, as I look back on things, I’m really glad we didn’t do.

And one of the biggest mistakes I think startups do is not doing everything they possibly can themselves. Here’s what I mean:

I, by no means, have one of those rich, deep soothing classical jazz DJ or audio book children’s storyteller voices. No one on our team does – well, maybe our audio intern is close. But when we set out to do the audio tracks for our videos or characters in our games, we were faced with either hiring someone who has that voiceover work experience or doing it ourselves. Since one involved probably thousands of dollars for all the recording we needed and one involved doing it ourselves, we went the doing it ourselves route – both recording and editing them. Now, yes, in some cases, we are actually going back and recording those very early rough voiceovers, but we were able to get to the point where we can go back and redo them. 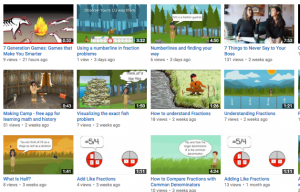 Yep, we made all those.

Same thing with videos. We have only twice hired outside videos editors to cut us any kind of video – once it was a friend of an employee who offered to make us a commercial for $150 if we supplied the raw game footage and another time it was wrapped in as part of the day-long shoot we did using USC students for our demo day footage and the whole day of shooting (with equipment they provided), editing, the raw footage, our edited demo day video and the commercial cost us $650. Everything else, from in-game videos to YouTube clips have been done by us, mostly using iMovie. Our first Kickstarter movie was done by AnnMaria and myself with the help of some friends who gave us editing feedback (for free!), and our second one was filmed by Dennis and put together by someone we had working on a part-time contract position. Were they perfect, glowing examples of the greatest Kickstarter videos ever? Maybe not. But since they helped net us $75,000-plus, I think they worked just fine. I can’t tell you how many companies I’ve seen spend hundreds of dollars having a 30-second spot edited or thousands of dollars having something shot and edited. None of them jump to mind as doing any better than us. 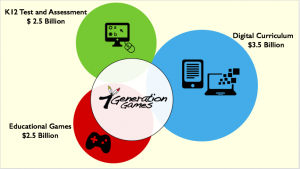 Same goes with PowerPoints, which recently have become the ever-present albatross around my neck, as anytime I’m not doing something, I feel like I should be working on a PowerPoint for one thing or another. About a year ago, someone mentioned that maybe I should outsource our PowerPoint design. The content was good, but I was told “it looks like something you just created in PowerPoint.” Um, yes, that’s because I did – it’s actually in the name of the item you asked me to provide. Look, maybe I am lacking the nuanced artistic sensibilities of a graphic designer or whatever. But it doesn’t look like something I slapped together using MacPaint either.  “Well, at least use a different font,” I was told. And I smiled and said “Thank you for the feedback” because it seemed a better response than what I was thinking, which is “Anyone who says ‘I would have invested in you if only you hadn’t used Calibri’” is not someone I want to be dealing with anyway. And if I really had to employee a designer and drop cash every time I needed to do an updated deck, it would mean less money for other – what I consider to be – more important things. And maybe my decks will never be hung in the MOMA, but I’ve seen enough startups that had stunning decks end up with nothing else.

We have one animator on staff (and for a while, we had a gap between animators where we had none). We were at a point where with the amount of animation work we had, it didn’t make sense to have someone on staff – but when we looked to contract it out, we saw people who were either charging our entire animation budget for a single 30-second clip or whose work was so-so at best. We went with option 3, which was using GoAnimate, a largely drag and drop animation site. And now that we have an animator, we still use it for secondary video because it suits the work we need it for and it costs 2% what an animator would.

With our game testing – instead of paying an outside service thousands of dollars per month to go through our games and report bugs, we do it ourselves and use Bugzilla. And it’s actually better for us to do that because in going through the product we see ways it could be better – which is good because we don’t have a dedicated UI/UX person on staff – and I prefer it that way because instead of getting the insights of one “expert” in a space that is relatively subjective, we’re getting feedback from 15 people that enables us to improve our product.

Honestly, I think doing these things has – on several occasions – made the difference between up existing and going broke at time when we were working to bring in additional funding. 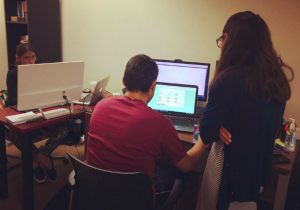 Our team is awesome.

One other thing I want to point out because I so often hear people say, “Well, yeah, but you know how to use X software.” And my answer is “I didn’t always.” No one taught me Garageband, iMovie, Powerpoint or GoAnimate or really any of the software I use on a daily basis. I figured it out myself (sometimes with a fair amount of swearing and large amount of restraint in not drop kicking my computer, but by myself nonetheless.) The same goes for most of our team. In fact, that’s one of the things I’m proudest of about them, their ability to learn new skills and their willingness to do so. Not to mention their willingness to chip in whenever and on whatever we need them to do – whether it’s having our animator record audio or our translator make animated videos or our developers create art elements.

Those are the things that I think make all the difference. (And that enable us to make games like the ones featured in the new product video I made yesterday!)