“I’m sleepy.” My 4-year-old refused to wake up this morning.

Daylight Saving Time was clearly the idea of someone who didn’t have children to get off to school.

This morning marked possibly the least favorite morning of the year for parents nationwide as moms and dads had to struggle with rousing young children out of bed for school an hour earlier than the week before – coming after a night of trying to get them to bed to refrains of “But I’m not tired.” True, the clocks had changed, but let’s face it – anyone with kids knows that pointing to a clock as any kind of measure of time for small children is completely futile.

Now perhaps your children are not like mine. Maybe your children cheerfully bounce out of bed without any need to be shaken and then full-bodied lifted out of bed. To be fair, my baby usually is that way and wakes up smiling and laughing but it’s often at 6:15 a.m. – at which point, I tell him, “I don’t know you until at least 7 a.m. Go back to bed.” Of course, at 7 a.m. this morning – which was the equivalent of 6 a.m. just two days ago – even he wasn’t up.

So what exactly is the point of Daylight Saving? It turns out there’s a bit of history and math to it – which makes it relevant to me posting it here under my 7 Generation Games blog (and therefore gives me a reason to rant about it). 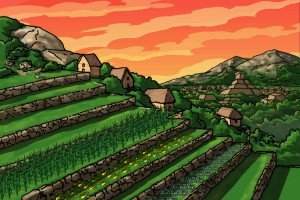 Daylight Saving Time has nothing to do with farming. However, there’s a level in our upcoming game AzTech that does.

According to the NY Times, Daylight Saving Time has nothing to do with farming as apparently many people seem to believe is where the practice started. That’s too bad because if it did, I could tie it into the fact that both of our upcoming games — AzTech and Forgotten Trail — have farming-related scenes (yep, just managed to work a plug in there anyway).

Instead the whole “Fall back, Spring forward” practice traces its roots to looking to save money during World War I (because as we know wars are incredibly costly), and there were those who believed that adjusting the time to better leverage the hours of daylight would mean that people needed to use less electricity for lights and well, I’m not sure what else besides lights. (The whole messing with the clocks thing had been tossed around before that, but it was in 1918 that it was put into effect in the United States. And, as this article from History.com points out it’s really called Daylight Saving Time, not Daylight Savings Time. Now, don’t you feel smarter?)

Whether the practice is effective or not, depends on which study you find. And as someone who has been up to her eyeballs lately in academic literature reviews for the purposes of recent grants, I can tell you that for as much as people love to cite academic studies, it’s amazing how often you run into published scientific research that varies widely. (Obviously, that’s not always the case, for the record, studies on 7 Generation Games actually have shown the same results time and time again – that kids who played our games significantly improved over control groups.) 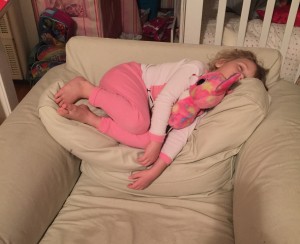 The same 4-year-old who didn’t want to get up refused to get in her bed last night as she “wasn’t sleepy” — as shown by this picture taken 10 minutes after that statement.

However, with Daylight Saving, it’s more of a mixed bag. Some studies – like one by the Department of Energy — show it saves the equivalent of “the amount of electricity used by more than 100,000 households for an entire year. Other studies show it does nothing. And then, of course, there’s studies that show it actually results in higher energy bills. I attribute those higher costs to parents across the country needing to consume more coffee, hence, more coffeepots running, hence higher electric bills. That is, if you don’t die from a heart attack first.

Of course, they say what doesn’t kill you makes you stronger – which I think is certainly the case from Daylight Saving since I had to do about 15 preschooler lift and shakes this morning to get my 4-year-old up and grumpily out the door.