If you didn’t know, now you know, the Library of Congress is a wonderful resource for teaching any subject. Today, I was working on our newest game, Aztech, and writing “bonus level missions”. I had seen a lesson a teacher did where students were given several digital photos from a historical period, say, World War I, and had to put them together in a photo album, in the order the events occurred, writing a paragraph about each one. I thought that would be a great activity, but the era I’m working on now is the Mayans and Aztecs.  If you think there are photos from that time, you are really bad at history.

So… what to do?  Well, I came across this amazing story from 1531 (if you knew how much I hated history as a student, you will be amazed to see I typed those words). Seriously, it was awesome. 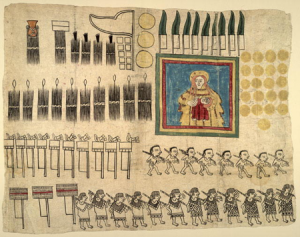 You can read the whole story on the Library of Congress site and see all eight images, but here it is in a nutshell.

Didn’t see that coming, did you?

So, I thought it would be a very good activity for students to both learn about history and develop their writing skills by providing them a photo of Cortés, also in the Library of Congress site, and the eight pages. They can write a sentence or two describing each picture, and, if they need help, a prompt will be provided for them.

How do we score this, though? I’m going to say a very heretical thing here – not everything needs to be graded. My thought is that we save what students entered as their story and play it back to them after they submit.

There is actually a good research base for this, for teaching academic English (that is, distinct from conversational English), using models of more formal language. I could pretend that the research base is why I thought this would be a good activity, but the truth is, that I thought I would have enjoyed doing this when I was a kid and so will many of the students that I know.

Then, I used the research to justify it after the fact.

One thought on “Now Playing: Making History and English Awesome”