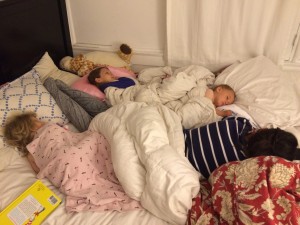 This whole parenting thing is exhausting. (Also, I don’t even know why we bothered buying the kids their own beds.)

Welcome to “Parenting Like I Know What I’m Doing,” 7 Generation Games’ new blog that takes a look at parenting – well at least from one person’s perspective (mine)! If you don’t want to read the whole bio, the quick version is I’m Maria Burns Ortiz, co-founder and CEO of 7 Generation Games and mother of Eva (almost 8 as she’ll tell you), Millie (4) and Cal (1).

We’re starting “Parenting Like I Know What I’m Doing” because a lot of our audience on social media as well as our users are parents, and we realize that writing about the startup life isn’t necessarily super-relevant to people outside the various Silicons — Valley, Beach, Alley, Prairie (no, seriously, Silicon Prairie is a thing – and apparently there are several of them). We’ll still do our startup diaries posts, but we wanted to expand to providing more posts that would appeal to more people who come to our site.

PLIKWID – yeah, that acronym probably isn’t going to catch on,  – is going to be about, as the name suggestions, parenting. AnnMaria referred to it as kind of a Mommy Blog, but to me that implies an ability to do anything that you could put pictures of on Pinterest, alas the Pinterest gene is one I’m seriously lacking. (But if you’re into Pinterest, we actually have a 7 Generation Games Pinterest page – but it’s run by someone else on our team, not me.) That said this blog will be about my experiences, reflections, random observations and occasional rants as they relate to raising three small children while working fulltime/running a company/launching a startup.

If you are coming to this blog looking for dinner recipes or cute crafts, this isn’t going to be the place. But don’t leave just yet. 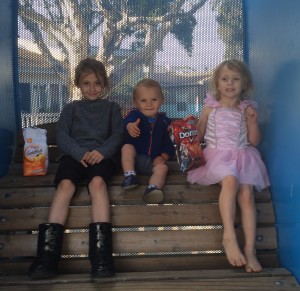 Here are my three kids. All them are dressed and two are even wearing shoes – success!

While I’m not much on crafting or cooking, I’ll tackle plenty of other topics surrounding raising humans from the first-person perspective. We’ll run the gambit from traveling with and without small children for work to finding cool learning apps for your kids to“Seriously? How many times do I have to say, ‘Get off the iPad?!’” Feel free to drop in and relate or read and feel superior that you are doing this parenting thing so much better than I am. The reality is I’m largely just making it up as I go along.

And if you have ever promised your children they could have Cheetos for breakfast if they just went to bed now for the love of God or if you have ever put your daughter’s hair in a bun while rushing her out the door in the morning because then hopefully no one will notice that you didn’t get to brush it out because she was screaming like a banshee, then we might be kindred spirits – so you should feel right at home here.

P.S. Oh yeah, and while the goal of this blog is to provide interesting, relevant, relatable, useful or at the very least amusing content, each post is also going to contain a few very thinly-veiled plugs for 7 Generation Games, not only because this is the 7 Generation Games site (going back to the running a company/launching a startup point above) and not only because I’ve got to pay the bills (three kids are expensive!) but also because the games we create are really awesome and I really do think that people should buy them for their kids and check them out.

2 thoughts on “Parenting Like I Know What I’m Doing: Welcome to Our Newest Blog!”