My house is constant chaos (when I write chaos, that’s really a code word for messy). We have three small children and a small house. (Normally, this would be the part where I plug something about math or learning + buy our games, but instead I will say we’d like to someday move into a bigger house and more game sales can help us get there – so buy our games!) 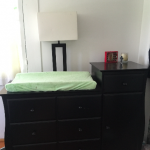 I’m currently organizing my house. The top of the changing table is as far as I’ve gotten.

Now in my defense, our house is not Hoarders messy. (I have someone who cleans it once a week so it’s not dirty – it’s just that socks and shoes and Legos and other wearable and playable things seemingly jump out of drawers and off shelves on a constant basis.) My mom likes to watch Hoarders because she says it inspires her to clear out stuff from her house. I appreciate Hoarders because I can then look around my house and go, “You know what? It’s not so bad.”

But still, I have dreams of one day having “a place for everything and everything in its place” – which I thought was from Mary Poppins, but Google is telling me that Ben Franklin said it. Maybe I just wished I had Mary Poppins finger-snapping cleaning ability and merged the two. Now, I’m going to admit there are days where I have started to tidy up and given up, reasoning that it would just make more sense to move. However, not only are we halfway through a two-year lease, but after moving four times in four years, I don’t particularly have desire to move at this exact moment. 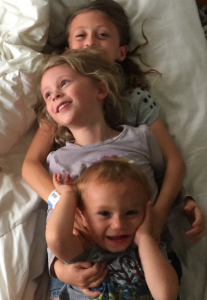 Why isn’t my house perfectly tidy and organized? See Exhibits 1, 2 and 3.

So with that off the table, I’m left to tackle the chaos. The problem is I’m pretty sure things multiply in my house when I’m out – no matter how much I throw out or give away, there’s never any less stuff in our house. I don’t know if Shopkins can breed or what. Moreover, I have a 1-year-old who believes it’s his life mission to take out two things for every one item I put away.

I’m not even lying or trying to be marketing-y (yeah, I just made that word up) when I say my new approach is driven by one of the themes in our new game Forgotten Trail: persistence. I think one of the issues that I’ve had in getting my house organized (aside from the whole being busy working and traveling and raising three kids) is that I kind of look at it in its complete disorganization and just find it overwhelming. I don’t have the couple of days straight it would likely take to go through everything at once – especially with my sidekicks working against me.

But as I was helping my daughter with her math homework last night, I couldn’t help by see just how dramatically incremental growth builds to the point of a huge difference. From number recognition and understanding to basic addition to basic multiplication to more complex multiplication, and before you know it (probably because you’ve been too busy looking up new homes to move into since your current home is such a mess), your kid is doing multistep math problems that even you can’t do in your head. It’s not that she sat down and learned all of math at once, but she persevered and made small improvements that built upon each other until suddenly, I’m like, “Wow, that’s pretty impressive.”

I realized it’s kind of been like that with developing our games as well. We start and they don’t even exist. Then they do but the initial versions are rough. Then little by little, we clean them up to the point where they’re commercial quality and people can — and want to — buy them. 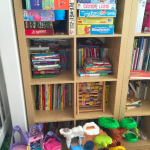 Can you find the pencil bag here? I couldn’t either.

I thought maybe, it might work with my house as well. Which leads me to my new home organizing approach – I pick one area that I am going to clear/organize a day. Like completely clear/organize – as in putting whatever is on it away, not just moving the stuff to another place (which is fittingly my 8-year-old cleaning approach – Me: “I asked you to clean those toys up off of the floor.” Her: “I did. I put them on the coffee table.”) And my hope is eventually, if I just keep actually making the effort to do that every day, I will have organized my house – not necessarily to the point of “Real Simple” magazine spread perfection, but enough so that when my daughter realizes as we’re walking out the door that she doesn’t have her pencil bag, I’ll be able to spot it without feeling like I’m living in a page out of “Where’s Waldo.”

We’ll see how it goes. Worse case scenario, our lease is up in another year, so maybe we’ll just move and will happen then. Or maybe in 17 years when all of the kids have moved out of the house. (Hey, the fact that I’ll still be at nearly two decades from now is nothing if not persistent.)