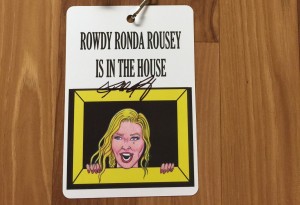 So … it has been a crazy week. I am writing this (AnnMaria) because our CMO, Maria, is currently on a flight back to the east coast.

We’ve been a little lax on posting updates (although we have actually been working on the game) because Ronda had a UFC world title fight this weekend. We also did a demo at 106 Miles in Santa Monica last Wednesday.

Now that Ronda’s fight is over, we are back in the office planning the next levels. We had some very interesting discussions I’ll post later under Outtakes.

Ronda is still a little too happy after the fight. The scene we are working on now has to do with counting coup. You can check out a video of us doing this on our latest Kickstarter update. We have just under three days to make our target, and I’m sure we will.