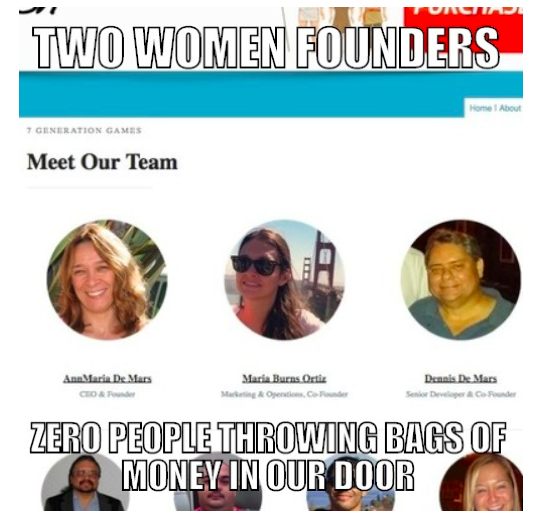 I attended an event the other night where, as it does from time to time, the topic of women founders came up.

One of the speakers, a very nice and unquestionably successful investor, mentioned that he had just closed his first deal with a female-led company. He noted that out of 40 deals he had done, this was the first one with a female CEO. When the room clapped, my jaw dropped.

Sure, it was great that he had invested in a company with a woman at the helm, but fact that it happened only every one-in-40 times wasn’t applauseworthy. To me, it was pathetic.

The panel went on to discuss the need for more investment in women founders, during which this gem was said aloud, “Right now, I would say it’s actually an advantage to be a woman founder.”

I wanted to laugh aloud. In fact, I actually did laugh aloud a few weeks ago when I was at another event and someone said that exact same line. However, the more I hear that refrain the less I find it hilarious and the more it makes it want to groan.

[Just so no one gets confused here, I’m turning on my sarcasm font] I’m so glad someone pointed out that women have such an advantage when it comes to working in tech and founding startups. After all, that’s why Silicon Valley and the tech startup scene is dominated by women. Oh, wait… [/sarcasm]

This is not at all a dig at the specific investor. I actually had a chance to sit down with him one-on-one previously, and he was generous with both his time and insight. In that meeting, he gave me some solid advice.

No, this is a dig at the entire Silicon Valley/tech startup landscape. Now I transitioned over to tech entrepreneurship from sports media, so I came in pretty well-versed in male-dominated industry, especially white male-dominated. (Sports media is 85% male.)

Now, if I was following the advice of Brocade Communications CEO Lloyd Carney — who is quoted in yesterday’s Bloomberg piece about being a minority or woman in Silicon Valley saying, “I tell women and people of color directly, ‘Don’t you dare advocate for diversity. Your career would be over.’” — I would say nothing. However, I refuse to heed stupid advice.

If you read recent reports about the lack of diversity in tech companies, you know how abysmal diversity numbers are. In the bigger tech companies, the gender divide is about 70-30. Numbers are harder to come by in the startup scene, but anecdotally, there seem to be even fewer women working in startups.

And mind you these are overall percentages, not a breakdown of executive level roles. Everyone wants to point to Facebook COO Sheryl Sandberg and Yahoo! CEO Marissa Mayer as proof that it’s not all bad. When there are several hundred people in corporate level positions within the tech industry and you keep having to point to the same two examples of “it not being so bad,” guess what, it’s pretty bad.

But let’s get away from the fact that there are few women in leadership positions within the tech industry and talk about women who are working to establish themselves as leaders in tech by launching their own companies – and how “easy” it is for us.

It is so easy for women-led companies to get startup funding that in a world where the gender breakdown is roughly 1 out of every two people are female, 1 out of every 20 VC funded deals went to women.

Companies where the CEO is a woman – like ours is at 7 Generation Games – received less than 3% of VC investments.

“But, but, but… we’d love to invest in and hire women. The problem is there just aren’t that many qualified ones out there.” That’s what Valley/tech folks stammer when all their other “justifications” have been debunked by actual facts.

Women run more than a third of the country’s businesses, have a similar rate of working on starting or actively running a new business — 11 percent compared to men’s 16 percent — and launch companies at twice the rate of men. The Diana Project has also found, as the report notes, “many fundable women entrepreneurs had the requisite skills and experience to lead high-growth ventures.”

In the case of our CEO, it’s certainly not a lack of qualifications.

She has four degrees, including a Ph.D. and an MBA. We’re doing educational games about how to improve student test scores – and her dissertation was on standardized testing.

She has real-world experience in the field. We’re creating math games, and she has taught math at every level from middle school through Ph.D. level coursework.

Because the tech startup scene seems to thrive on buzzwords, I’ll throw in a few more:

We’ve got traction (+100 buzzword points). We’re selling more individual games every month. The level of interest we’re getting from schools – which is a longer buying cycle – is increasing. We’re on the up-and-up.

We’ve got runway (+250 buzzword points). We’re looking for investors now, before we desperately need money. Right now, we’ve got enough cash to keep going at our current burn rate for probably 10 months. In addition to working to increase sales revenue, we also have submitted additional grant proposals and are pursuing outside investors so that we can further extend that runway. (They say the best time to be looking for money is when you don’t absolutely need it.) And even in a doomsday scenario — if our sales were to plateau today and we received no new grants and no investors — we could actually survive after those 10 months for quite a while (probably a couple of years). We’d have to make some staffing adjustments and it would slow our development and impact our ability to scale (+5 buzzword points just for using the word “scale”), but we could soldier on for a lot longer than most startups out there.

Yet, we’re out hustling to secure funding on almost a daily basis. Despite what everyone seems to be saying, we haven’t been able to find the spot where they just hand out large stacks of $100 bills to female founders. No one is running by our office and throwing in bags of money.

Look, we get that fundraising is hard. This post is not a complaint about the amount of effort it takes for a startup to get funded. But just quit saying how much “easier” it is for women founders and what an advantage women founders have. It’s an assertion that is simply not rooted in actual facts. (It’s worth pointing out that I have never actually heard a woman founder or investor say how much of an advantage being a woman in tech has been.)

With that said, we’re going to get back to working — both on our products and on bringing in money. However, from now on, we’ll leave the office door open just in case anyone wants to run by and throw in those bags of money that are just being given away to woman-led tech startups.