In the last post, I wrote a little about Chile in general.

On Sunday, unbelievably, I took the day off.  A mentor of mine gave me some good advice. He’s in his seventies and has been quite successful in business. He said,

At my age, and you are getting up there, you should treat your work as a vacation. I’m not saying you shouldn’t work hard, but that you shouldn’t be doing it if you don’t enjoy it.

Since I had flown all night Friday and then written a blog post, answered a couple dozen emails, completed the metrics for our first Startup Chile pit stop (number of users , cost per acquisition and all of that good stuff) plus worked on some technical problems for one of our games, I decided the next day, I’d take some time off. I walked around the neighborhood for about four hours, just to get to know the area.

Here’s some about my neighborhood. The apartment building is across the street from Catholic University and next door to an enormous park. 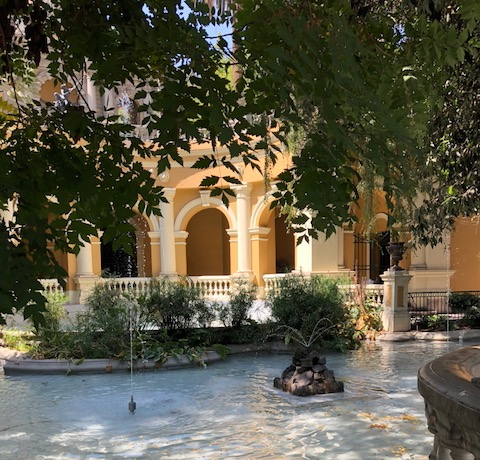 There is another park a few minutes walk away. There are 4 playgrounds that I walked by within 5 minutes of here. Not that I was planning on going to the playground but I did notice the kid-friendliness. 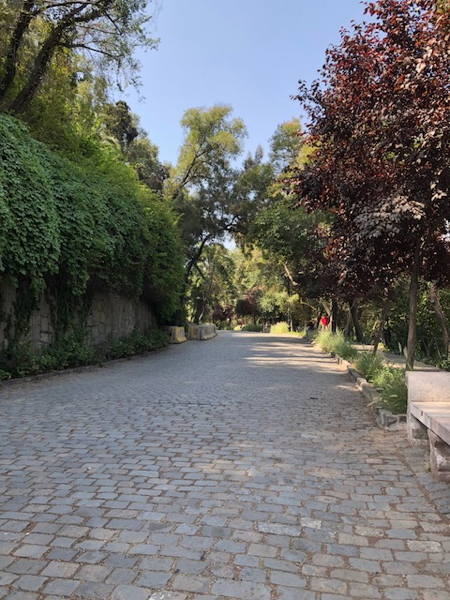 One of many, many paths in the park

There are several very nice hotels in the neighborhood as well as the university. As a result, there are a TON of bars, restaurants and coffee shops, from the places like Nolita, that are at the high end and serve a lot of tourists, to the Chilean version of Jamba Juice and Starbucks for the students.

Actually, I passed two Subways, a McDonalds and a Starbucks walking around today. 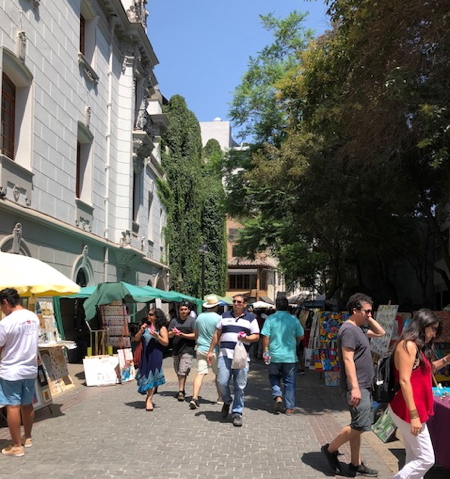 There are whole streets of people selling stuff from tables and booths. Imagine a farmer’s market but instead of food they are selling art and books.

Wi-fi is super important to me since I will be working with some of our team remotely. Also, my family wants to keep in contact with me over FaceTime. There have been zero problems with the wi-fi, and it was part of the apartment contract, so it was working when I got here. Compared to Brazil, Beijing or Tunisia it is MUCH better. However, I have to say that I was in Beijing 10 years ago and Tunisia 8 years ago so it might be different now. Wifi in Brazil makes you want to tear your hair out, and it’s not just me saying it, ask anyone who lives there. 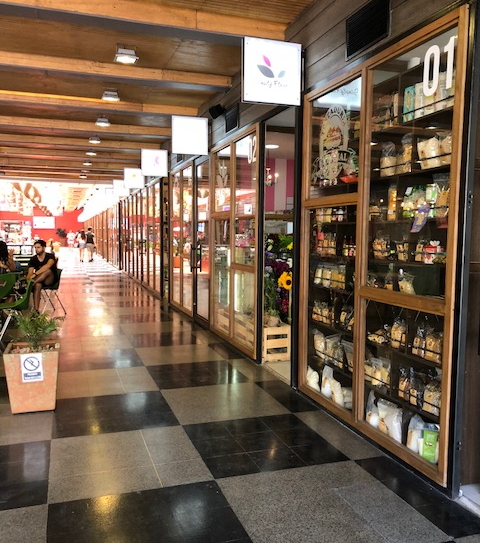 There is a LOT of security here. Every hotel seems to have a security guard or two out front, as do many of the upscale shopping areas. They seem to be more for deterrent than anything else, unlike some of the other countries I’ve been where the police are patrolling with uzis, all of the security people are unarmed – more like the bouncer in a bar who would tell you, “Let’s get you a cab, buddy, I think you’ve had enough to drink for tonight.”

The police just have regular handguns, like at home, and I haven’t actually seen them do anything except walk around, bike around or ride horses around. For some reason there were two army armed vehicles downtown today. I thought that was a little intimidating but I looked inside of one (I AM nosy) and it was just a guy in his twenties reading his text messages on his iPhone, which wasn’t exactly scary.

So, that was my day off except for lots and lots and lots more museum and park pictures. Also, for some reason doing choreographed dance moves with your friends is a thing here. I must have passed 40 groups of kids in an hour. 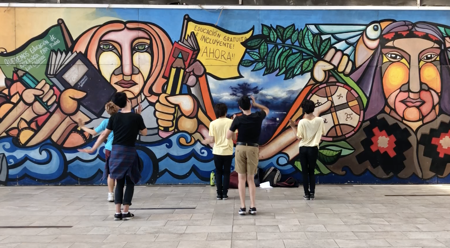 So far, the city is great. If you’re interested in my first day at Startup Chile, the other people from around the world who made the cut and what worries me (it’s not what you think) tune in tomorrow.

While you’re waiting for the next post, how about downloading one of our games from the app store. Play a little. Maturity is over-rated. You’ll learn math, history and Spanish while you’re at it, so you don’t even need to feel guilty.

2 thoughts on “Startup Diaries: AnnMaria’s day off in Santiago”