Skip to content
Home » Blogs » AnnMaria » Startup Diaries, Santiago Edition: I made it!

If you didn’t know, now you know. I’m in Santiago as part of Startup Chile, where I will be expanding our line of bilingual games for the Latin American market. Welcome to the Startup Diaries: Santiago Edition as I chronicle my experiences scaling up internationally.

I made it to Chile and am comfortably ensconced in my apartment. This is a little surprising given that I had no more information than an address and the name Francisco. Also, I was an hour and a half early. 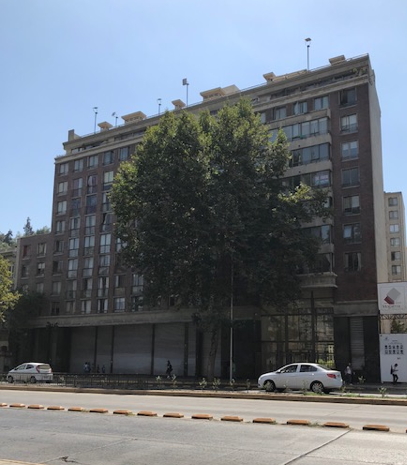 Made it to my apartment

A couple of things worth noting:

1. Americans often believe that “You can always find someone who speaks English”. I have not found this to be the case in many places, including Santiago.

Neither the taxi driver, nor either of the three doormen for the building, nor anyone at the two restaurants and three stores I have been in today have spoken any English. The good news is that my Spanish, while not nearly as good as I would like, has been adequate for me to buy dinner and shop for groceries, coffee and books. (I just heard the manager at this restaurant telling one waiter to take 2 specific tables because they don’t speak Spanish. So, there are some waiters here that speaks English. In case you are interested, the restaurant is named Nolita and the food is delicious.) As with most countries, including the U.S., the more a business caters to wealthy tourists, the more likely they are to have bilingual staff. (Speaking of bilingual staff, you can get AzTech: The Story Begins free in the app store. Because we’re so nice.)

2.Everyone from Chile is super nice

Everyone I have met, from the Chilean Consulate in Los Angeles to Francisco, who met me at the apartment 15 minutes after I arrived and apologized for being late, when, in fact , I was early and he came an hour and 15 minutes earlier to give me the keys and show me around. Then he gave me his phone number and email unless I needed anything. People from Chile kept telling me, “You’ll love it there. Everyone is really nice.” This is true.

3.Getting through immigration and customs took a quarter the time it does in the U.S.

Hence, my arriving at the apartment early. I planned for 2 hours and it took me less than 30 minutes. There are plenty of people in uniform offering to help – in English – but I didn’t need any help. Just a heads up – I’d heard that Chile can be tough on agricultural imports, even dried fruit or nuts, so I didn’t bring any kind of food, not even a candy bar.

4. Chile is cheaper than the U.S. , but not as much as I’d expected

I’d say prices average about three-fourths to half what I’d pay at home. You could do it even cheaper if you chose. I decided to get an apartment in a good neighborhood, and, like in any city, that will cost you more. Since it is just me, I have a furnished studio apartment that comes with all utilities, internet, a pool and a gym. It’s about one-third of what it would cost in Los Angeles. 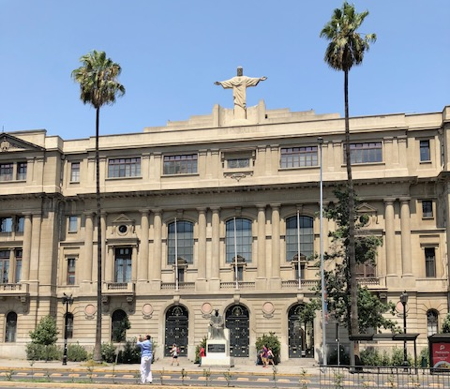 I’m across the street from this university

I probably won’t go out to eat as much as at home. Food is cheap if you aren’t eating out. Bread is about 75 cents a loaf, local fruits and vegetables are about 50 – 75 cents a pound (except these are sold by the kilo, of course). Since I have an apartment, not a hotel like when I’m usually traveling, I’ll probably eat out 2-3 times a week rather than 2-3 times a day. That’s good because the better restaurants aren’t all that much cheaper than U.S. prices. 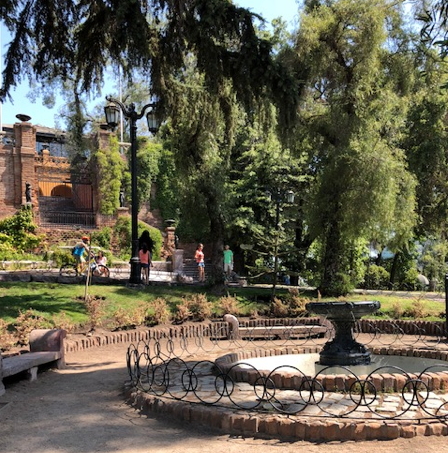 As you can see by the photo of the giant park next door, the neighborhood is definitely fine. I finally got into the apartment and unpacked some stuff by 10:30 am. I can usually sleep on any flight but I was really excited and had been up all night, so I took a nap before heading out to walk around for hours and see what I’ve gotten myself into. Check back tomorrow for my next post where I actually take a day off (yes, unbelievable) and explore the neighborhood.

While you’re waiting with bated breath for my next post, check out AzTech: Meet the Maya in the app store. After all, building out these games is why I’m here.