Anyone who runs a startup will tell you it borders on being life-consuming. There’s no 9-to-5, You’re constantly working on building your company, including evenings and weekends and those times you wake up in the middle of the night realizing you need to email someone back and that you still haven’t figured out what to say.

Being a parent is also like that – a never-ending list of things to do, children to take places and shoes to find. While doing both – having a family and running a startup – is doable, it’s certainly not easy. That’s why people look at me like I’m insane when I say I founded a company and have three small children. But clearly, I am not bothered by the untraditional – which is probably how it came to be that we now live in 7 Generation Games HQ.

Now, usually when you’re building a company, the goal is to grow out of your home office and into somewhere you can run a staff out of. For our company needs, it’s not realistic or effective for us to have a 100% remote team. Everyone who works at 7 Generation Games works in the office between five to two days a week. And as we started to grow we realized we needed more space than the extra bedroom office at AnnMaria’s house provided.

So in 2014, we rented a small office in a complex. It was a nice building, but given our budget, we ended up with an interior office (as in “no windows”). When they launched a 3-year project that turned our lobby into a construction zone, we decided it was time to go. From there, we moved to another really nice building where we rented two, then expanded to three offices four blocks from the beach – where the conference room had a $1 million view. Of course, we don’t (yet) have a $1 million budget, which mean slightly odd-shaped offices and again no windows. We were growing, but we’re also very financially conscious and just weren’t ready to splurge on a fancy office. Right around this time, we got our annual office renewal – which saw our rent going up a fair amount.

My house lease had converted to month-to-month, and I wasn’t crazy about how much rent we were paying for our place either. That’s when I had an idea.

What if… we merged them together.

The Live/Work concept isn’t new. The running a company out of one is a bit more formalized than just having a home office. There’s specific Live/Work spaces (often lofts) that are arranged so that you can have both a functional office space and a living space. It’s actually not that uncommon in the tech startup space, but usually when it’s five people living in the place, it’s five young dudes in hoodies drinking energy drinks, not young dudes as in 2-year-olds.

I first floated the idea to my co-founders who were onboard. It would save us money, and it would save all of us time. All of our home office setups were better than the office we were renting (in terms of connectivity and our own space), so while at least one of us went into the office daily, we were doing it just for staff management. With me taking the lead of the being in the office part, that meant they’d have more time to work.

I had to find someplace that would both work for my family to live and for my staff to work.

Then I broached the idea with my husband, who I was less sure would be on board with the idea. You know, “Hey dear, I have an idea, let’s move into my office…” But he said, “Sure.” (When we found the place, his only request ended up being that we didn’t put anything in front of the open staircase so that he could do pull-ups on the stairs. I figured that was a compromise I could make.)

Then I mentioned it to the staff – who said they’d be up for a change of scenery, a more flexible floorplan and a little bit of daylight.

Next came the challenge of finding a space. There weren’t a ton in Santa Monica – most of the apartment buildings here are just traditional apartments – but we found one that fit our needs and budget. Our current building is actually a combination of folks who just live in the lofts, who just use the lofts for company offices and who seem to be doing the double that we’re doing. (Of course, we’re definitely the only ones in the building doing the live/work thing with three kids.)

And yes, it had to be in Santa Monica. From an office standpoint, our staff come from different places around L.A. When they took the job, it was contingent on them working office shifts – and they made the commitment to come to our offices based on them being in Santa Monica. Some don’t even drive to work, but take the train – so to move to somewhere that would be harder for them to get to didn’t seem right. And because we really value the team we have, we didn’t want to take the chance of moving elsewhere and losing people. From a family standpoint, moving too far away would mean commuting to get my kids to school, which would defeat the whole point of merging everything together making life easier.

So we did it. It involved the complete chaos of moving your home and then moving an entire office in the span of three weeks – while continuing to run business operations as usual and successfully executing a Kickstarter.

A couple weeks in, it’s been great. The stars aligned, and our new place is even closer to the train for our staff and my kids’ school for me. Both business-wise and personally, we have more money and more space. 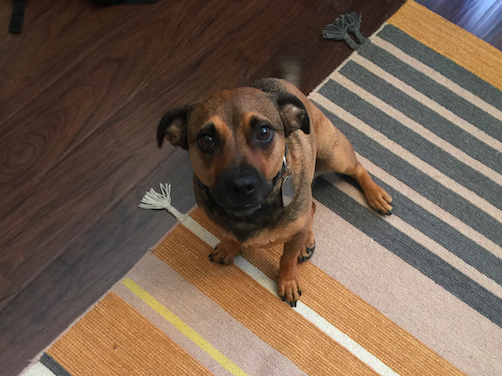 Much to my staff’s delight, we also now have an office dog – which is the most stereotypical thing you can have at your tech startup aside from a pingpong table, which we do not have. Of course, our accountant won’t let me put the dog on the payroll, so I am still counting him as my personal pet.

My staff likes the space. There are no more loud lawyers down the hall arguing on the phone with the door open. The network speed is considerably better – which matters when you’re a tech company. 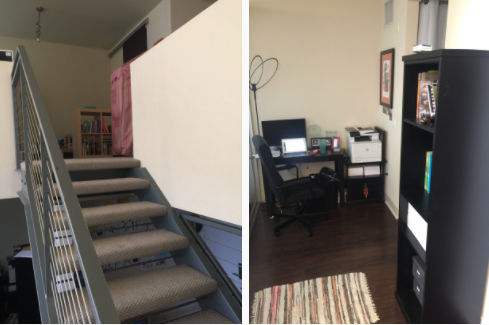 My commute. My office.

And I have no real complaints. I don’t have to worry about the file I need to access when I’m working after my kids are in bed being on one of the office computers, because they’re all two steps away. My home office set up that I like better is now my actual office set up. I can’t beat the commute and gone are the days (and all of the time spent) shuttling from my home office to the main office to get my kids at school to back to the office because I inevitably forgot something or had to drop something off.

It’s funny how things sometimes feel like they’ve come full circle. We once went from being so glad to get the office out of the house to now being so happy to having them co-located once again. Of course, it a totally different iteration, but that’s how it goes when you’re working on a startup.

We’re making really cool things at our new office. You should check it out. Get Making Camp in English or a bilingual version!