Skip to content
Home » Blogs » 7GenGames » Throwback Thursday: I take back every bad thing I ever said about hackathons

Going through our archives, we came across this great post by Dr. AnnMaria De Mars from March 10, 2015 “I take back every bad thing I ever said about hackathons“ that we wanted to share in case you missed it the first time around.

Some people may have said that hackathons are a stupid ass idea where a bunch of people who have can’t afford to buy their own pizza spend 48 hours with a bunch of strangers and no showers.

Okay, well, maybe that was me.

I take it all back. We kicked off our hackathon at noon on Monday and wrapped up at 8 pm on Tuesday. The rules were simple – everyone who was working those days was to wipe their schedule completely for 8 hours each day and do nothing but work on the game. No emails, no blog posts, no meetings except for a kick off meeting each day to assign and review tasks. Jessica, Dennis, Samantha and I worked on the game for (at least) 16 hours. Any emails or interviews got done before the hackathon hours or after they were over. (I did pause for a brief interview with the Bismarck State College paper.)

Maria came in from maternity leave and worked 8 hours on Monday, baby in tow. Gonzalo and Eric each worked their regular shifts on Monday and Tuesday, respectively, doing nothing but writing code, creating sprites and editing audio. Sam even pitched in a few hours early in the morning from Canada. Our massively talented artist, Justin, completed all of the new artwork before the meeting so we had it in hand to drop into all of the spots where there had been placeholders.

So, in two days a total of 100 hours were devoted just to game development. We made a giant leap forward. The 3-D portion of the first level is nearly done. The new characters are being dropped into each scene.

Why did it work so well? For one thing, we were all in the same spot for a long time. Although the original plan was to meet and then people would go there separate ways, on Monday, five of the six people working stayed at my house. Three of us even slept there. That had two positive impacts.

First of all, whenever anyone needed something, whether it was a piece of artwork modified or a question answered on whether we had a sound file of footsteps in the woods or to be shown how to do a voice over in iMovie, there was someone else to provide that assistance right on the spot. Very often, you can spend hours searching for something on Google, watching youtube videos, reading manuals trying to figure out how to do X when someone else can come up and say – Click on Window, pick record voiceover, click on the microphone in the middle of the left side of the window.

There are also those questions that CANNOT be found on Google, like where the hell was the new background image saved and what is it called.

The second positive impact was we got around to tasks that needed doing for a long time. While it may have seemed it kept us from getting real progress done on the game, the fifth time Sourcetree complained about not tracking those damned Dreamweaver .idea files, I HAD it and we removed those from the repository forever. When something bugs you every now and then you may think, “I’ll do it later”, but the fifth time it happens that day …

Anyway, I would share more of the awesomeness of the hackathon experience with you but it is now 9 pm and we are taking the team out for sushi. 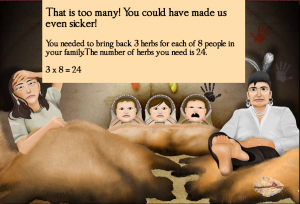