Sometimes, it’s flattering to be insulted. No, wait, hear me out. We have parents and some kids telling us that our games are not as interactive as Call of Duty, Grand Theft Auto or World of Warcraft. Our world is not as big. The graphics are not as amazing. They are exactly correct. I’m not going to point out I think we do pretty damn good for 1% of the budget those games have. No, what I want to say is,

No one gets better at math from Call of Duty.

Okay, I stole that comment from someone on my other blog which I have written for TEN YEARS and am shortly going to stop writing – but that’s another story.

My point is that it is kind of flattering that people are comparing our games to mainstream games. It makes sense, too. We are one of the very few educational games on Steam, which I would consider the platform for people who are serious about computer gaming.

I understand that this is perhaps not what your idea of an educational game looks like, and that’s the idea.

I was visiting a school earlier this year and heard a teacher describing the software that was supposed to be teaching their at-risk youth math. I said,

God, that sounds boring as hell!

A student in the computer lab, overhearing me, laughed and said,

Believe me, it is.

The teacher went on to say that the school had great difficulty getting students to do the program. They were resistant to sitting down and doing what were basically worksheets but on a computer screen. Wouldn’t you be? These are kids who are behind in school already, due absenteeism, low motivation or other reasons. They get more disinterested and eventually drop out, still years below grade level. Some teachers don’t give a damn.  Some do but they don’t have the time or resources to address the situation. Some just don’t know where to begin. 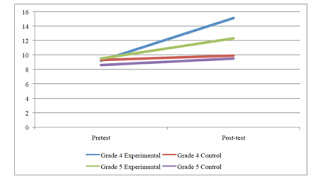 The two lines in the graph above are the students in fourth and fifth-grade at a school that used our games. The students represented by the bottom lines had their regular math class. You don’t need to be a statistician to see the difference.

Someone said to me,

“Gee, saying that your games are better than math worksheets isn’t a huge recommendation.”

“It is if you were that kid doing the worksheets yesterday.”

Got a kid? Got a computer? Get ’em together.