Throughout these field trips, we’ve discussed different topics from teaching multiplications and fractions to learning a little more about the Dakota and Ojibwe languages. Today, we will be discussing buffalo hunting.

How exactly do these internet field trips work? Well, let’s say you wanted to learn about buffalo hunting within the Native American culture. The first thing you’d do is go to Google (come on, everyone does) and search “buffalo hunting Native Americans.” So that’s what we did, and here are some of the useful resources we found.

The ITBC is probably one of the most solid and user-friendly sources when it comes to understanding the history, impact, and importance of buffalo in the Native American community. According to ITBC, buffaloes represent the Native American people and, “remind them of how their lives were once lived, free and in harmony with nature.” The ITBC has been crucial to the conservation and reintroduction of buffalo into the lives of Native Americans. Presently, their membership is made up of 58 tribes across 19 states and a herd of over 15,000 buffaloes. They have a ton of educational resources – including one of our favorite graphics we’ve seen on the traditional uses of the buffalo, which is a great image to show your class if you’re teaching about this topic.

Smithsonian Magazine is always a reliable source when it comes to the history of our nation. Their site also does a great job of explaining the history of the buffalo in the United States and its importance in the Native American community. They get into more detail about the impact of the Transcontinental Railroad in this incredibly thorough (and depressing) report titled, “Where the Buffalo No Longer Roamed.” 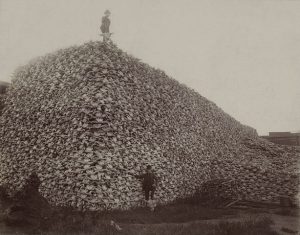 As you continue to scroll through, you will come across the National Humanity Center and its in-depth “Buffalo Tales: The Near-Extermination of the American Bison.” It is a heartbreaking historical account about the decline of buffalo during the nineteenth century. Despite the impact of natural factors like fires, diseases, climate, etc. the high demand for buffalo tongues, skins, meat, and robes coupled with the expansion of railroads and the arrival of European settlers almost caused the complete demise of buffaloes. (Many historical scholars believe there was a push to hunt buffalos to near extinction in an attempt to destroy Native people whose way of life centered around the buffalo.) There used to be anywhere between 30-60 million buffalo and by the late 1800s, they hit a low of 100.

Native American Netroots describes itself as, “…a forum for the discussion of political, social and economic issues affecting the indigenous peoples of the United States…” which makes it a simple site that covers a plethora of complex issues happening in the Native American community. On their site, they talk about the buffalo jump which consisted of a young man disguised with buffalo horns and robe fooling the buffalo into thinking he was one of them. The young man, who had to run faster than the buffalo, would run for miles until the herd eventually jumped off a cliff. Then, at the bottom of the cliff people would be waiting to “process” the dead buffalo for food and tools.

Naturally, after reading about such an activity I felt the need to find a video…

In Alberta, Canada there’s a UNESCO World Heritage site called “Head-Smashed-In Buffalo Site” where Native Americans, in addition to traditional hunting, would chase buffaloes off the edge of a cliff. Travel Alberta has a very cool and educational video about it.

I also came across this other video that shows illustrations of the buffaloes falling. The video is based off the Lakota people (who are part of the Sioux nation).

Now, we come to our favorite exhibit…7 Generation Games

While playing Spirit Lake: The Game your mission is to find medicine in order to save your tribe. Throughout your trek, you escape rabid wolves and…hunt buffalo! Spirit Lake is based on the Dakota Tribe who highly respected and revered buffalo. We just released an update to our game this week so check it out.

Buffalo played an important role in both the Ojibwe and Dakota people. It just so happens some of our games are based off those tribes as well! On the Fish Lake Teacher Resources site, you can find an entire pdf dedicated to teaching fractions by using buffaloes!

On our YouTube page if you do a search for “buffalo” you can find a handful of videos where students can learn about buffalo hunting, and find videos about buffalo bar graphs and even word problems!

We hope you enjoyed our latest Internet Field Trip and that you have a great rest of your Friday.

In the meantime, don’t forget to stop by the gift shop on the way out!