In my very introductory to introductory physics class in ninth grade, we were taught that there is a basic principle of physics that no two objects can occupy the same space. I know my physicist co-founder would likely take issue with my oversimplifying of this statement as when I looked up my rusty recollection of the laws of physics, I found that this lesson was correct-ish – in that there’s a lot of caveats and loopholes to this law that have to do with fermions and bosons and whatever, which is a rabbit hole my high school teacher definitely did not go down. 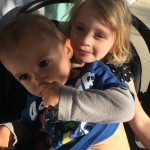 Twenty years later, my children are doing their best to prove science wrong. No matter where we are, whether in the car, in the house, in bed, sitting on the couch, in a park with 9,000 acres, my children immediately want to occupy the exact same space. We could be in a movie theater without a single other person in it, and both of my girls would want the exact same seat.

It brings me to a flashback as a child of hearing my exasperated mother tell my sisters and I, “There are 2,000 square feet in this house, you do not all need to be in the exact same square inch.”

But now as a parent myself who has repeated a variation of that statement, I am pretty certain there is another scientific (perhaps biological) principle that convinces small children that yes, they do need to be.

In a society where many people seem convinced that they need bigger and more, I’m starting to think that is a total waste of money (and the time and effort it takes to make that money). In fact, I’m thinking of downsizing to just a single chair and who needs more than a room or two because no matter how much space there is my children will be simultaneously trying to wedge themselves into the exact same spot. 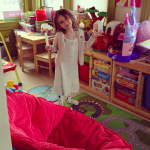 “Oh, I know we have 8 million toys, but I only want to play with one of them — and that’s whichever one my sister has.”

I think this principle is in some way related the “same toy law,” which (I am just making up now) states no matter how many toys you have in your house and no matter how long it’s last been since anyone has played with this toy, the minute one child starts playing with it, the others will automatically be drawn to it as if by magnetic force. The second part of this law is that the minute the first child abandons this toy, all other children’s interest in this toy will immediately cease to exist. [If you missed my “Burns Ortizian theorem for how long it will take you to get anywhere with young children,” you can check it out here.]

One might think that suggesting another toy or another seat or even another room would be the answer, but if you’re posing that as a solution, you likely do not have more than one child. Yes, that might seem a logical solution but the laws of physics (made up by me), like children’s behavior, are not always logical.

Want to give your kids the foundation to be good at actual physics? Or even just better or more engaged when it comes to math? Check out our games!

One thought on “Testing the Boundaries of Physics and My Patience”