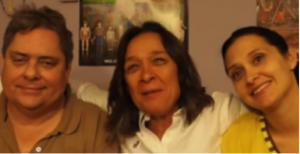 I get this question all of the time,

In case you don’t know, the three co-founders of 7 Generation Games are my husband, Dennis, me and my daughter, Maria.

It’s not how most people seem to think.

A minor advantage of being from the same family is we save money by sharing hotel rooms when we travel, which, as you can see, is often.

A major advantage is that we know one another much better than the average co-founders, and that leads to fewer misunderstandings.

For example, have two games, Spirit Lake and Fish Lake, that you download on your desktop and play. These are really good games for learning math and they run on Mac and Windows. We are now making a version of each that will run on the web, playable on Chromebooks.

Dennis was very stressed because he’d said it could be done in a few weeks. Having looked into the requirements in greater detail, he was listing today all of the things that needed to be done. It’s one of the easier programming problems because he knows how to do all of it, it’s just a lot of time to put all of the pieces together. He felt bad about slipping a deadline.

Don’t worry about it. I know you always are over-optimistic about how long things will take, so I multiply any estimate you give me by four. I told people the new versions will be available in the fall for the new school year, which sounds just about right.

There are a lot of reasons I find working with my family to be an asset, but the degree to which we know each other’s strengths, weaknesses and idiosyncrasies is a big one.