Going through our archives I found this interesting blog about halloween customes and education written by our CEO Maria Burns Ortiz.

“What does the ‘E’ in STEM mean?” my 8-year-old asked me this afternoon as I drove her to soccer practice.

“Which is what?” she asked, reminding me that she is only 8.

“It’s like when you make things,” I said. Well aware that I was oversimplifying the concept, but she’s 8.

But I realized when we got home that I had what I believe people who use those kind phrases call a “teachable moment.”

“Remember, when you asked me what engineering is?” I asked. “It’s basically what we’re doing now.”

“It’s basically when you have something you want to make, but then you need to make it – the designing and making it part is engineering,” I tried to figure out how to keep it 8-year-old- centric. “Like say you have something you want to create – like a bridge or a machine or, in this case, a Halloween costume – and you figure out how you are going to do it, and you have a plan and get materials and then you actually make the thing.”

We were spread out across my bedroom floor on Day 5 (over the course of 2 weeks) of building her Halloween costume. Yes, building.

Waving to her adoring subjects!

Background: Two years ago, my oldest daughter wanted to be Elsa from Frozen for Halloween. So she was. Her and 9 million other little girls, including probably four others in her then first grade class alone. What she didn’t know – because it was her first year at her current school – was that there was an annual costume contest with three winners from each grade. Not shockingly, Elsa No. 9876 did not win. Now, she seemed unfazed at the time, but apparently this did not go unnoticed. In fact, she started planning probably mid-July as to what her costume would be. It had to be, she told me, something amazing. And then it hit her, she wanted to be a snow globe.

Having zero clue what that would entail, I tried to see if she was willing to consider any other ideas. She would not be swayed. 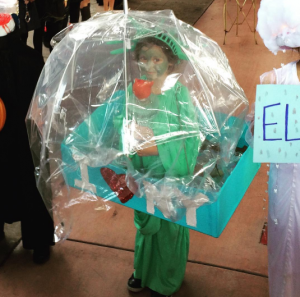 As someone whose family has been involved at my daughters’ school for two decades (my sisters went there too), we knew full well that homemade costumes have a huge advantage. So that left us to figure out how to create a snow globe costume – which was a lot harder to figure out than one might expect. In the end, however, we settled on a Statue of Liberty inside a snow globe – which involved a clear umbrella with a clear shower curtain taped to it, a box painted with the words “I [HEART] NY” and a Statue of Liberty costume. Sadly, I was out of town the day of the school parade (it was the final week of the BoomStartup EdTech Accelerator we were taking part in), but she won! (The costume turned out to be unintentionally perfect too because she was able to ditch the box/umbrella and just be Lady Liberty to go trick or treating.)

Of course, that only fanned the flame. Which lead us to now. She is now a year older and obsessed with both winning the costume contest and Star Wars. And after her initial plan to be Rey and craft some kind of speeder was dubbed too ambitious by her realist mother, she settled on R2D2. And now, the Internet if full of far more hardcore Star Wars parents than me – and as I read posts about people using power tools to convert trashcans, I refused to be discouraged. After my daughter scoured the web for dozens of images, we set out to create our own R2D2 that would work with our engineering abilities. (Thank God, for the woman who knits R2D2 hats on Etsy.) And with a combination of poster board, paint, glitter, rubber cement, glue, foil, masking tape, dental floss, shoe boxes, a laundry hamper, said Etsy hat and more, tonight we completed our masterpiece.

“I am so winning this,” she said as she tried on R2D2 for the very first time. “I mean, this is perfect engineering.”

You know what you can “so win” at? Our games! Check out the awesome games we make – either for computer or for iPad!