Skip to content
Home » Blogs » 7GenGames » The Story Behind Our Games

The New York Times ran a recent read-worthy piece about a video game company that’s succeeding with games that focus more on the story than the action – that is games driven by the story more than the running around through levels finding treasure or fighting bad guys.

It struck a chord with me because, well, one of the things that I’ve been working hard to implement at 7 Generation Games – both as we’ve gone over our initial games and exponentially more so on our game currently in development – is creating better narrative surrounding our games. Now, our games have always had a storyline, but I’m talking about deeper, richer narrative that sets the tone for the entire game. Now, obviously, I might be a little biased when it comes to the role of storytelling in video games since I come from a writing background. But that’s part of what makes our founding team at 7 Generation Games such a great fit – Dennis thinks there should be more cool gameplay, while AnnMaria thinks there needs to be more educational elements and I beat the “we need a more fleshed out story” drum. And since I’m writing this blog, I’ll tell you why I think narrative is so important. 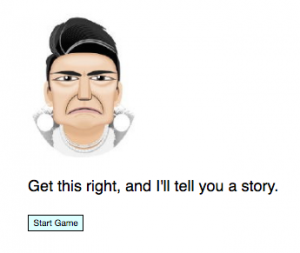 The continuous rollout of new technologies is constantly making what was previously considered “cutting-edge” seem dated when judged on graphics, aesthetics and gameplay. So what is a key factor in a game’s ability to withstand the test of time? Storyline. This is especially true within the adventure game genre. As opposed to say puzzle or shooter games, adventure games center around a narrative that is essential in setting up the overall story arch which gives the necessary context and purpose for gameplay in order to engage players. (It is also worth noting that many games draw from multiple genres, i.e. first-person shooter adventure games, like Doom, or trivia adventure games, like Where in the World is Carmen San Diego?)

The role of narrative within video games has long been heralded as equally, if not more, important to all other elements of game design and production. Good stories have the ability to capture the interest of players, engaging them to work to solve challenges (be it in the form of missions or contextually related math problems) and persevere in the face of in-game obstacles in an effort to continue through until the story’s – i.e. the game’s – end.

When it comes to educational games, narrative is severely lacking. Despite the hundreds, even thousands, of math games that exist, there are very few that have standards-aligned content created and vetted by credentialed educators, and even fewer with that content integrated as part of the game design.

As Glenda Gunter, an academic and an expert on edtech, wrote, “There is a significant difference between simply representing educational content in a game or building a game like hangman or a one that replicates a popular quiz show and embedding content as an integral part of the game’s fantasy context.”

Good storytelling enables us to do that at 7 Generation Games– a compelling story allows us (along with our artistic team) to build out an engaging fantasy world. And it’s not by chance that we settled on incorporating history in our games. After all, history is at its core a rich library of stories.

In creating a narrative within our virtual worlds, we can put the educational content in context. It’s not “What’s the average of a bunch of arbitrary numbers?” Instead, in Forgotten Trail, players need to determine how far they should travel on average each day in order to their Uncle Don’s house without running out of supplies. Getting to Uncle Don’s is the first stop on their journey across the country as they retrace the Ojibwe migration. In AzTech, characters are transported back in time and players need to help them get home. The story is so rich in AzTech that we even talked about doing a digital ebook novelization companion to it. Of course, that’s on the very long list of things we’d love to do if we ever get the time.

Until then, you can check out this cool commercial for Forgotten Trail, which is presented in a book-looking template – and after it’s convinced you that you need our games, you can buy them here.