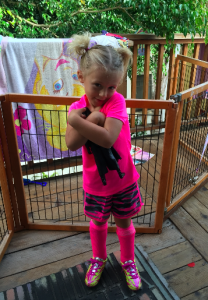 She looks all ready to go to soccer camp here. Apparently something changed in the five minutes between when this picture was taken and when she arrived in camp.

I spent this morning working from the sideline of a soccer field. It was not my initial plan, but when my husband called to tell me my 4-year-old was crying and hanging on his leg, refusing to join the group at soccer camp, I saw two real options (leaving her screaming and crying in the hands of some older teens/young 20-somethings for the next three hours was not one of them). I could either go pick her up and bring her home – which would inevitably mean allowing her to become an iPad zombie by lunch (since I know that would be the only way I’d really get work done) or packing up my laptop/phone/portable charger and heading over to camp and working from there. Off to camp, I headed.

“I can’t believe you’re getting anything done,” an observer remarked.

“Well, the internet isn’t quite as good as in the office,” I said.

Of course, the hotspot from my phone is definitely better than lots of other locations where I’ve found myself trying to type away at something or other.

As a tech founder/parent of three children/someone frequently traveling for work, the ability to work anywhere at anytime is essential. It’s one of the priceless intangible skills. The reality is that 9 million things are going to come up – whether it’s work things or kid things – and being able to adapt to whatever your work surroundings happen to be can make a big difference as to whether or not things get done.

It probably helps that the first decade of my professional life was spent as a sports reporter, so it was far from my first time writing from a sideline. As a parent, it is also clearly far from being my last time – although my daughter had it made clear to her that tomorrow I will be working from work.

One thought on “The Value of Being Able to Work Anywhere”