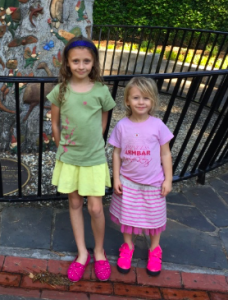 Kids are different. They’re just born different. That was the gist of a NY Times post the other day titled, “Some Babies Are Just Easier Than Others.” It couldn’t be more true.*

Of course, I didn’t need a blog post or any  articles/books/studies to clue me in on that fact. I live it.

My first two children are both girls. Not only that but they look almost indistinguishable if you compare pictures of them at the same age Now, not only based on their physical similarities, but also based on the fact that they came from the same gene pool and had been raised in relatively similar environments — same parents, same apartments, etc. — I expected my girls would be, well, similar. (If you’re the parent of more than one child, you are laughing at me now.) And in some regards, I was correct. They both breathe air. They both seem to think they need an infinite number of Shopkins. They both enjoy bothering their sister and claiming “I’m not doing anything.” And that’s about where the similarities end.

One eats, but doesn’t sleep. One sleeps, but doesn’t eat. I say this so often that my older daughter is known to inform people of this yin-and-yang before I even get a chance.

One loves math, which is convenient when you run a math video game company. The other really likes books and wants to be read to and will sit and “read” by herself, which is something that her sister was never very excited about doing.

One pretty much always listened – now be it very begrudgingly – but when I did the “Don’t make me count to five,” she always came by five. She would huff and sigh and stomp her feet, but she came. I didn’t even realize this was the case until the second one came along, and I said, “Don’t make me count to five,” and then I got to four and she said “Five” and stuck her tongue out! My mouth dropped – not so much at her then 3-year-old audacity, but because it had never occurred to me what “serious consequences” awaited after the five-count. In what was certainly anti-climatic, I used my very angry voice and sent her to timeout (which is incredibly ineffective in our house because it has no doors – although that’s a 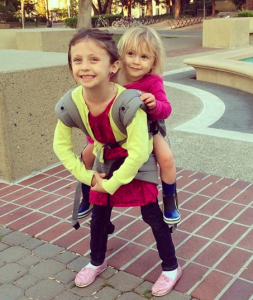 story for a different time).

My younger daughter screams and yells and cries when she’s upset, but bounces back quickly. My older daughter pouts and sulks (and has almost always), which is on a noise level is preferable, but sometimes she drags it out to the point where you wish she’d just yell and move on.

I think that’s an important perspective to maintain when it comes to learning – it’s something good classroom teachers recognize and plan for, but it’s something you don’t always think about as a parent. Eva loved letter flashcards. Millie could care less about flashcards, but likes going through books and pointing out the letters in each word. We haven’t yet gotten too deep in academia with Millie because she’s 4, but I can already see that she’s going to do it a different way than her sister.

Given my job, I’m involved in a lot of conversations about differences in learning and ways to  provide the best possible learning experiences for all students within the classroom setting.  Whether it’s differentiated instruction, personalized learning or individualized instruction (this graphic breaks them down far more quickly and effectively than I could), the point is there isn’t a perfect one-size-fits-all approach to learning or teaching. But the great thing about educational technology is that it’s providing more ways to learn and teach than ever before . And yes, we have designed our games at 7 Generation Games with differentiated instruction (you only have to get routed to one of our learning modules to see that much) and different learners (from gifted first graders to remedial high schoolers) in mind because like the NY Times blog -and, I guess now this one – describes: all kids are different.

The idea seems obvious, but sometimes it’s not. It’s helpful to keep that in mind when dealing with kids – whether they’re in your classroom or in your family room. Because what you’re going to find is what worked in the past with one kid doesn’t always work with another. When that happens, the only that has worked for me is to try a different approach.

This is not even getting into the difference between the girls and their baby brother! (I left him out of this analysis not because he’s a boy, and therefore different based on that fact alone, but more because he’s only a year old so there’s less to the body of research I have on him.)

*Well, I don’t know if “easy” is the right term I’d use for anything to do with babies. Babies are a lot of work!